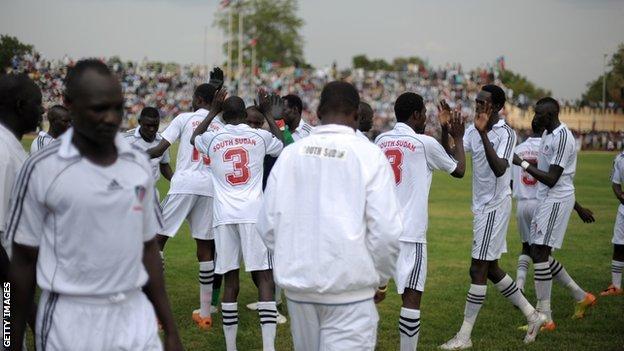 It will be South Sudan's first officially recognised international game since the country was admitted into Fifa.

The game also coincides with South Sudan's celebrations to mark the first anniversary of independence.

President Salva Kiir Mayardit is due attend the game, which is expected to attract thousands of fans, including many Ugandans who live in the the country.

South Sudan's newly-hired Serbian coach Zoran Djordjevic said although they respect Uganda his side will do their very best.

"I am always optimistic in football and I am sure my team will give Uganda a tough test," he said.

The home side will look to striker James Joseph, who plays for Gawa FC in India, for their goals.

Goalkeeper Jumma Genaro and skipper Richard Justin both play in the more established and competitive league in Sudan.

Uganda have decided to give several of their under-20 players some competitive action as they prepare for a 2013 African Under-20 Championship qualifier against Ghana on 27 July.

Despite it being South Sudan's first ever international game, the Ugandans say they will not be underestimating their opponents.

"We need to maintain a certain brand and must keep winning," captain Edward Ssali said.

The South Sudanese thought it would take them at least two years to reach this step - but a motion passed at the Fifa Congress in May significantly quickened the process.

South Sudan, whose nickname is Bright Star, have already confirmed they will play in East and Central Africa's regional championship - the Cecafa Senior Challenge Cup - later this year.