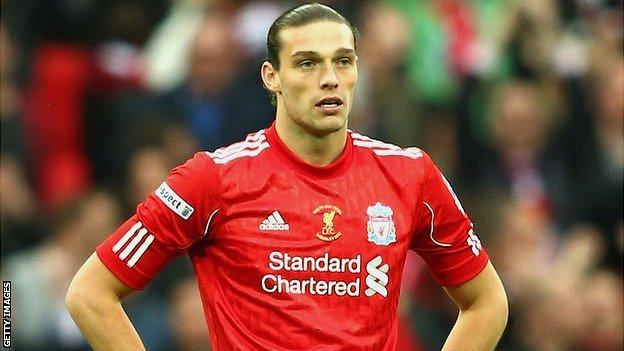 The 23-year-old England international has struggled to meet expectations since joining the club from Newcastle for a club record £35m in January 2011.

"It's something I would have to look at, I have to be honest," said Rodgers.

"Andy's always going to be linked with clubs, whether he was here or not. He knows exactly where he stands, but I have had no inquiries about him."

Carroll has been linked with a loan move to Italian side AC Milan, who were reportedly impressed by his displays at the recent European Championships, where he made three appearances for England and scored once, against Sweden.

Rodgers said: "There are many things to going on loan. Is it going to be beneficial for the club, that's the most important thing?

"Sometimes a player going out on loan - in general, not just Andy - can benefit the club in the long term.

"It gets them game experience and they come back a better player, a more confident one. Certainly more so than if they've been sitting on the bench for the majority of the season.

"I'm not going to sit here and say I will never let anyone go on loan, then come in here in two weeks and a player's gone, and you're saying 'you said you wouldn't let them go'."

Carroll came into this summer's international tournament in Poland and Ukraine following arguably his best form in a Liverpool shirt, during which he scored the winner in the Premier League game against Blackburn and goals in the FA Cup semi-final and final.

Prior to that the striker had come under criticism for his performances in a Reds shirt, with him having scored just eight goals in 49 appearances since his high-profile move from Newcastle for a record fee for a British player.

Critics have also suggested that Carroll may struggle to fit into Rodgers' preferred 4-3-3 style of play, while the manager is also believed to be keen to sign forward Fabio Borini - with whom he has worked at both Chelsea and Swansea - from Italian side Roma.

"He's [Carroll] no different to any player we have here," added Rodgers. "They might have all the attributes but not the mentality to play.

"It's a wee bit unfair for Andy to get labelled any other way. He's a good kid, a good lad, so we will just see how the formation of the group shapes up over the next four or five weeks.

"My task is to build a group that can challenge. Hopefully when the bus leaves at the end of pre-season, it will have the people on it who I want."