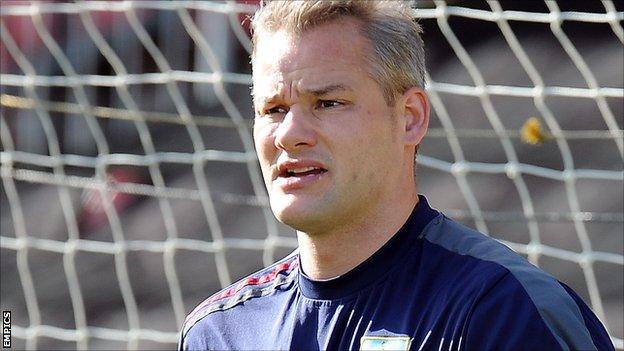 Veteran goalkeeper Brian Jensen has agreed to stay with Burnley for a 10th year after signing a new 12-month contract with the Championship club.

The 37-year-old Dane has played 307 times for the Clarets since joining from West Bromwich Albion in June 2003.

"We always wanted him as part of the squad and his experience will be vital," said manager Eddie Howe.

Jensen, who has been offered a testimonial match as part of his new deal, only featured four times at first-team level in 2011-12 because of injury, but regained fitness in time to start the final game of the campaign against Bristol City.

He was also part of the Burnley team that won promotion to the Premier League via the play-offs in 2009.

Speaking to the club website, Howe continued: "He has a big part to play in being a role model for the other players and the young group of goalkeepers we are bringing through. It's important to have good professionals around them.

"We were also delighted to offer him a testimonial which is recognition of the outstanding service he has given to the club.

"We are aware how popular he is and when he has his testimonial game I am sure it will be a special day for him and the supporters."