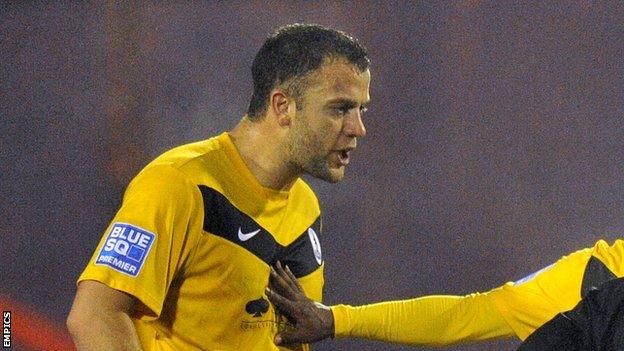 Nuneaton have made their sixth signing of the summer by bringing in former Lincoln and Telford striker Kyle Perry.

"I'm a confidence player," the 26-year-old told Nuneaton's website. "And some I have played under have not been the right man managers for me.

"[Boro boss] Kevin Wilkin has a proven track record and he is also a great man manager, which is what I need."

The much-travelled 6ft 4ins target man, who spent last season with Lincoln City and AFC Telford United, added: "I had a number of offers but once I'd spoken to Kevin Wilkin, Mickey Moore and Ian Neale it really was a no-brainer.

"The training sessions I've taken part in so far have been the most enjoyable I have had for a long time."

Perry was a trainee at Walsall until being let go by then Saddlers boss Paul Merson and went on to have spells at Hednesford Town and Hereford United.

He broke into League football in January 2008 when he joined Port Vale following Chasetown's celebrated FA Cup run, since when he has also played Conference football for Mansfield Town and Tamworth.