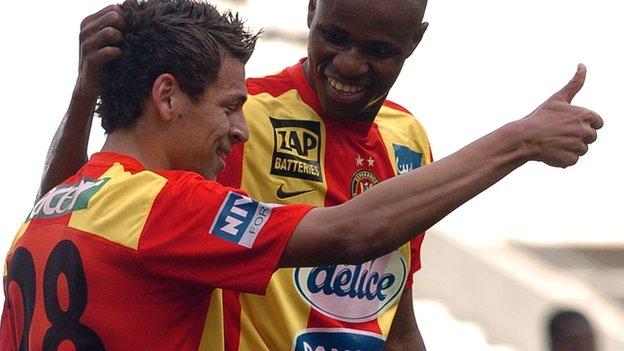 Defending champions Esperance of Tunisia got their Group A campaign off to the perfect start when beating hosts Sunshine Stars 2-0 in Nigeria.

Tunisian international Youssef Msakni gave his side the lead shortly before the midway point of the first half.

The visitors took a two-goal lead into the break when Yannick N'Djeng netted on the stroke of half-time.

The win lifts Esperance to the top of Group A, leading compatriots Etoile du Sahel on goal difference.

2007 champions Etoile won 1-0 in Algeria against AS Chlef on Saturday night.

Mohamed 'Gedo' Nagy struck the vital goal in the 90th minute to win the tie and send the Cairo giants second in the table behind Ghana's Berekum Chelsea.

Al Ahly led for long periods after Emad Moteab's 11th-minute goal, only for Mazembe to look as though they had won a point when Mbwana Samata equalised nine minutes from time.

The substitute's goal came despite the dismissal of defender Joel Kimwaki in a game that was played behind closed doors at the Military Academy Stadium because of concerns over the security situation in Egypt.

All the sides in the two four-team groups played their opening games of this phase of the competition this weekend, with another five rounds of matches to come.

The group phase of the African Champions League will end on 14-16 September, whereupon the top two teams in each group qualify for the semi-finals.