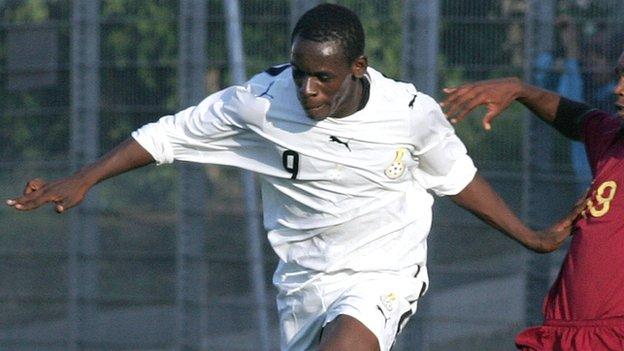 Ghanaians Berekum Chelsea made a fine debut in the group phase of the African Champions League when beating Zamalek of Egypt 3-2 at home.

The victory takes Chelsea top of Group B, although Al Ahly of Egypt or DR Congo's TP Mazembe can leap above them with a healthy win in Cairo on Sunday.

Ghana international Emmanuel Clottey was the hero as he scored a hat-trick.

In the day's late game, Tunisians Etoile du Sahel won 1-0 in Algeria against hosts AS Chlef in Group A.

Etoile, who won the 2007 title, won the match thanks to a seventh-minute header from Aymen Belaid, following a free kick from Mossaab Sassi.

The Tunisians failed to field new signing Moussa Maazou, with the Nigerien joining the club on a three-year deal on Wednesday.

In Accra, where Berekum were playing following instruction from the Confederation of African Football, Zamalek twice led through Abdoulaye Cisse only for Clottey to cancel both goals before firing a dramatic winner in the 90th minute.

Burkinabe Cisse opened the scoring after 21 minutes when finishing off a slick Zamalek move that cut through the Berekum Chelsea defence with ease.

But Clottey needed only eight minutes to draw the hosts level as he headed home an inviting cross from the edge of the six-yard box.

After Cisse capitalised on some sloppy Berekum defending after 34 minutes, Clottey drew his side level again - rounding the goalkeeper before coolly slotting home just four minutes after the break.

He had to wait until the final minute for his hat-trick as he tapped home from close range to give the group phase debutants a dream start.

The Ghanaians travel to four-time African champions TP Mazembe for their next match, on the weekend of 20-22 July, while Zamalek will host arch-rivals Al Ahly.

After starting this weekend, the group phase of the Champions League will end on 14-16 September, whereupon the top two teams in each group will go through to the semi-finals.

The winner of the two-legged final in November will represent Africa in Fifa's Club World Cup the following month.