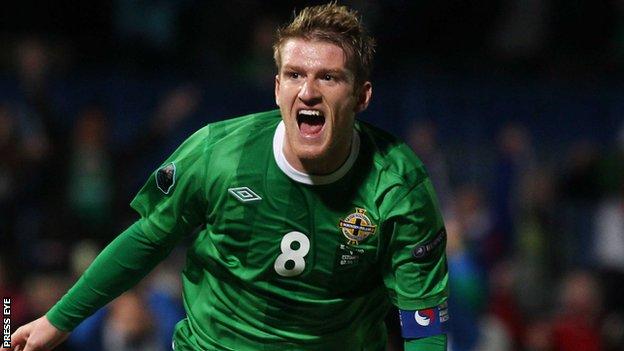 The 27-year-old midfielder was captain of the Scottish side but left after rejecting a transfer to the newco club.

Davis, who follows NI team-mate Kyle Lafferty out of Ibrox, has agreed a three-year contract with the Saints.

The move marks Davis's return to the Premier League, where he played for both Aston Villa and Fulham.

Davis told the club's website: "I'm delighted to get everything done and dusted and I'm looking forward to getting started.

"There was quite a bit of interest in me from other clubs. But, after speaking to the chairman and the manager, I saw the level of ambition the club has shown.

"They have had a lot of success over the past couple of years to get to this stage and they don't want to stand still - they want to keep moving forward and that was a big thing for me."

However, Rangers chief executive Charles Green has vowed to challenge the claims of players who have left Ibrox that they are free agents - and to seek compensation from the clubs they have joined.

The Scottish Football Association has already rejected an application from one English Premier League club for international clearance to sign a player leaving Rangers and the matter will now be passed to world governing body Fifa.

Davis left Fulham for Rangers in 2008 after an initial loan and went on to win the 2010 Scottish Players' Player of the Year and become captain of the Glasgow club.