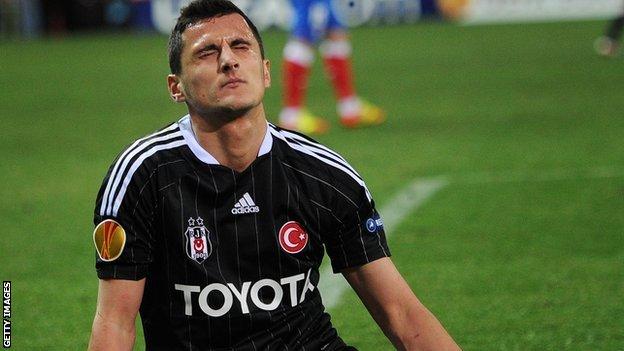 St Johnstone will face Eskisehirspor in their Europa League qualifier after Besiktas had their one-year ban from European competition confirmed.

The Court of Arbitration for Sport suspended a further one-year ban for five years.

But it backed Uefa's ban for next season after the 13-times Turkish champions were ruled to have breached licensing regulations.

The first leg of the second qualifying round tie will be played on 19 July.

St Johnstone will travel to the Ataturk Stadium before the Turks visit McDiarmid Park a week later.

A St Johnstone statement said they are "now waiting on absolute confirmation from Uefa, but it looks certain that our Europa League opponents will be Eskisehirspor".

"On such confirmation being received, the club will then be in a position to firm up details such as kick-off time and travelling arrangements," they stated.

Besiktas were banned in May after European football's governing body scrutinised the club's accounts in the second and third quarters of 2011.

CAS said in its ruling that the club owed millions of euros in transfer fees, salaries, social security contributions and taxes at the end of March 2011.

The ruling means that Besiktas cannot take part in this year's Europa League qualifying tournament despite having finished fourth in the Turkish league last season.

CAS also maintained a 200,000 euros fine, with half of that amount also suspended for five years.