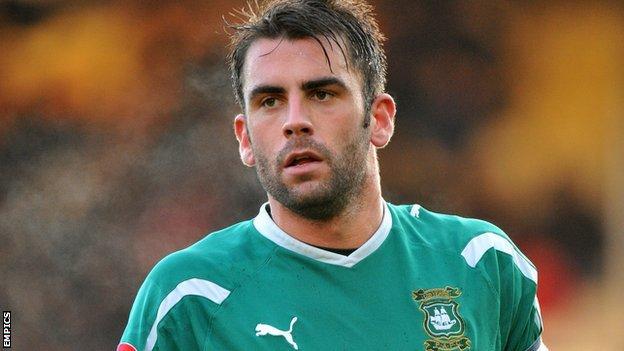 Hartlepool United have signed Simon Walton after the midfielder was released from his contract at Plymouth.

Walton, 24, was captain at League Two Argyle and moves up a division to become Pools' second signing of the summer after four years at Home Park.

Plymouth released him from his contract so he could be closer to his family.

"I'm a massive family man. I'm upset to leave but I'm taking a step forward in my life and a step up in leagues," Walton told the club website.

"The move has got everything right about it. It's a step up in leagues, which is probably the main thing. Hartlepool are in League One with a team that is aiming to go even higher than that.

"I'm going to miss Plymouth and the lads. It's a club going places and in a way I'm a bit sad I'm not going to be part of it, but I have my own bright future to look to now."

Walton made 66 appearances for the Greens in four seasons and was their leading scorer in 2011-12 with nine goals as they narrowly avoided relegation out of the Football League.

However, a desire to be closer to his family in Leeds has caused him to leave Plymouth and Walton joins ex-Middlesbrough winger Jonathan Franks at Victoria Park.

"We're disappointed to see Simon go and we wish him all the best for the future," said Argyle boss Carl Fletcher.

"Last year, he was a really important person for us.

"He's gone through so much for this club. He was my captain and pretty much leading out a bunch of kids when he was only 24 himself.

"He was a massive part of what we achieved last season."