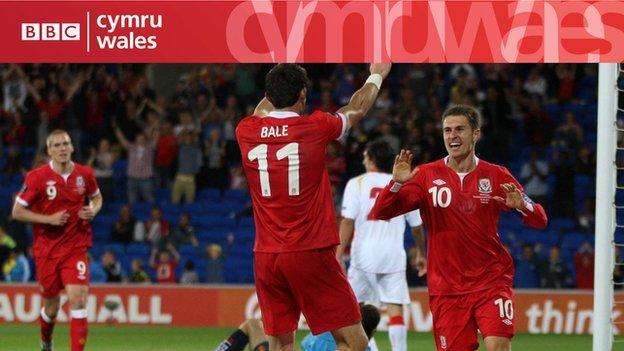 Wales international football is to return to BBC Cymru Wales television for the first time in eight years.

BBC Cymru Wales has agreed a two-year deal for the rights to show highlights of all Wales home games.

The programmes will also be live on the BBC Sport website.

Wales' friendly against Bosnia-Hercegovina on 15 August will be the first match shown, followed by the 2014 World Cup qualifiers against Croatia, Serbia, Scotland and FYR Macedonia.

Rhodri Talfan Davies, director of BBC Cymru Wales, said: "Sport is one of the major things that defines us as a nation and I'm delighted that BBC Cymru Wales will be showing television highlights of Wales's home football internationals once again, complementing our existing radio and online coverage in English and Welsh, and giving the audience the best of Welsh sport on all platforms."

The television highlights coverage for home matches is in addition to live broadcasts which have been on BBC Radio Wales, BBC Radio Cymru and online for many years. Both radio stations and online will continue to cover all Wales' games, both home and away. The programmes will also be available on BBC iPlayer.

Geoff Williams, head of sport for BBC Cymru Wales, said: "We know from our existing coverage that there is a real passion for football in Wales, and we are thrilled to be able to follow Chris Coleman and the Wales team on television, as well as radio and online.

"It is an exciting time both on and off the field. We are about to embark on a World Cup qualifying campaign with the aim of reaching Brazil in 2014 and Welsh football supporters will be able to enjoy the journey with the highlights on BBC Wales television and live coverage on BBC radio."