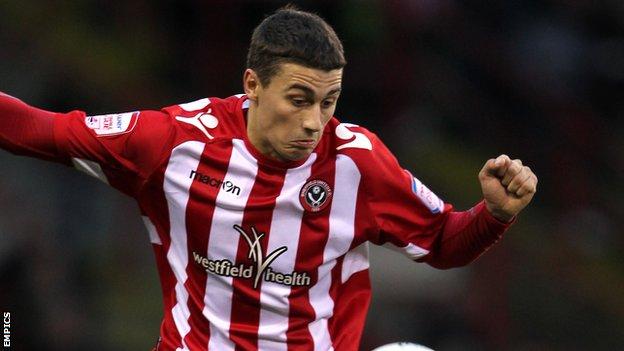 He will compete with Alan Hutton and Eric Lichaj for the right-back spot.

He's hungry to succeed and to go further in the game, both of which are attributes that we want at this football club and that we are looking for

"It's an excellent opportunity. The Premier League is where I want to be," Lowton told BBC Radio Sheffield.

"When I found out that there was an offer I was very flattered and excited by it all.

"I'll be keeping my eye out for Sheffield United results and I'll be coming to some games next season. I wish them all the best and hopefully they'll get promoted without me."

Lambert is confident that Lowton will continue to develop in the top-flight but is keen to keep the pressure off the youngster.

The Villa manager said: "He's a good player already and he's only young so he has the potential to be a really good player for us.

"He's hungry to succeed and to go further in the game, both of which are attributes that we want at this football club and that we are looking for.

"We won't put any pressure on him, we just want him to go out and enjoy playing. What he's done so far at Sheffield United has been great so hopefully we can progress him a bit and he'll do very well for us."

The Sheffield United youth product made 91 senior appearances for the Blades after making his debut in March 2010.

Lowton had a stint with United's sister club Ferencvaros in 2009 and had two years remaining on his contract with the south Yorkshire side, who were beaten in last season's League One play-off final.