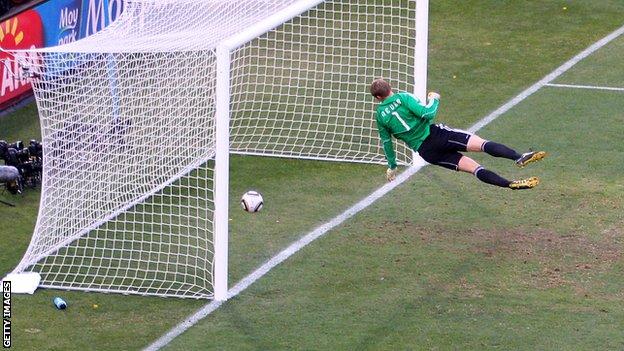 The International Football Association Board voted unanimously in favour of introducing the technology on Thursday.

Blatter said: "That [Lampard goal] was the moment for me to say, 'You can't afford for something similar to happen in the next World Cup'.

"We could say it is a historic day for international football."

Lampard's "goal" came when England were 2-1 down in the second round against Germany. Fabio Capello's team went on to lose 4-1.

There have been other similar incidents, most notably last month when Ukraine's Marko Devic was denied a goal against England at Euro 2012.

Fifa decided to act following Lampard's goal and eight different systems were tested, with two - Goalref and Hawkeye - being approved after going through a second stage of testing.

Blatter continued: "In the autumn of 2010, we started tests and now we are ready. I am a happy man that we did it. The objective is for 2014 but now we have a system which is available for others."

The English Premier League has already said it plans to introduce goal-line technology as soon as possible, maybe at some point during the forthcoming season.

The Football League also said it "welcomed the decision" and will now consider the future use of technology in its competitions.

However, not everyone is convinced it is a positive step forward. Uefa president Michel Platini has said that the technology would lead to "PlayStation football".

Blatter is confident the Frenchman will change his mind.

"He is more afraid that once technology comes in it will go from the goal-line towards the penalty box or whatever," said Blatter. "But I am sure with this unanimous decision of the international board that he will follow.

"He cannot go against history and this is new history. I am sure he is smart enough to realise that something has happened today in football."

England striker Sir Geoff Hurst, who scored a hat-trick as England beat West Germany in the 1966 World Cup final, has spent years answering questions about whether his second goal actually crossed the line.

"It would have shown quite categorically that the ball was quite clearly at least a yard over the line," he insisted. "But had it said it wasn't in, we would have won 3-2. There's still no difference.

"I am delighted though. I have been a leading advocate of bringing it in and I think it will benefit the game as a whole."