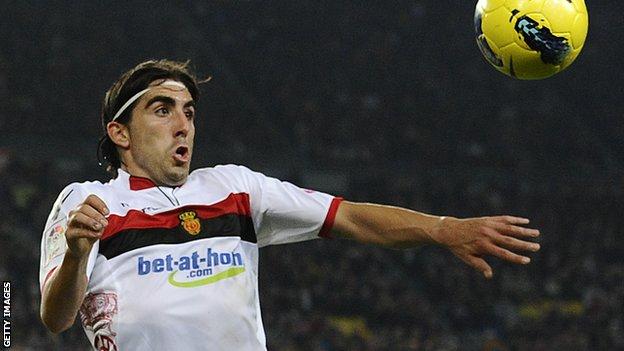 Swansea City have completed the signing of defender Jose Manuel Flores from Genoa for an initial £2m.

Flores completed a medical on Monday and agreed a three-year contract, subject to international clearance.

Centre-back Flores, known as Chico, also played for Laudrup at Real Mallorca during a loan spell in Spain's top division.

"I know I am joining a club that has been growing over the last few years and is still ambitious to go even higher," Flores told Swansea's official website.

"Having played in La Liga and Serie A, two great leagues, it's a dream come true to play in the Premier League, one of the best, if not the best in the world.

"I have been studying Swansea on the internet and I know I am joining a club with passionate supporters who are very close to the players."

Flores began his career with Cadiz and spent loan spells with Racing Club Portuense and Barcelona B before joining Almeria in 2008.

In July 2010 Flores joined Genoa in Italy and spent the 2011-12 season on loan at Mallorca during Laudrup's time as manager.

The defender has won three caps for Spain's Under-21 side and was a member of their squad at the 2009 Uefa Championship.

Midfielder De Guzman, a Netherlands Under-21 international born in Canada, also played under Laudrup at Mallorca.

The 24-year-old joined Villarreal for an undisclosed fee, believed to be around £7m, in August 2011.

Born in Ontario, Canada, De Guzman moved to the Netherlands as a youngster when he joined Feyenoord's youth academy and played over 100 games for the Rotterdam club.

In July 2010, he joined Mallorca on a free transfer and made 38 appearances before being sold to Villarreal.

De Guzman opted to represent the Netherlands after he gained Dutch citizenship in 2008.

He has won four caps for the Netherlands Under-21 side and also played at the Olympic Games in Beijing in 2008.