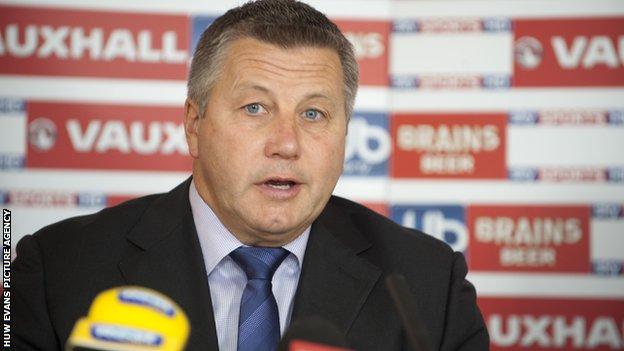 Geraint Williams has been confirmed as the new Wales Under-21 manager.

Williams previously had a two-year spell in charge at Colchester United, where his number two was current Wales assistant manager Kit Symons.

Brian Flynn left the Wales U21 post in May after eight years in charge when his contract expired.

"It's a very big job. Obviously it's the conveyor belt for the national team," said Williams.

"We've got to make sure we're out there finding everyone that's eligible to represent Wales and then making sure that we get them into the system and work with them.

"It's a dual role. Yes, it's all about training and development but the objective of every game [is] we want to go out and win."

Williams has yet to confirm his backroom team but says he will consult Flynn's staff and assess the situation with national team manager Chris Coleman and coach Osian Roberts.

"I'll be speaking with Brian's staff and obviously will be sitting down with Chris and Osian and we'll be looking at what staff we need to go forward," added Williams.

Wales manager Chris Coleman held talks with several candidates since Flynn's departure to find the right man to develop the country's next generation of internationals.

Like his predecessor, Williams will also be in charge of Wales' U17 and U19 teams.

The Football Association of Wales was keen to have the new man in place before the end of July because Wales U21 have a European Championship qualifier against Armenia at Wrexham's Racecourse Stadium on 15 August.

That is the same night Coleman's senior side take on Bosnia-Hercegovina in a friendly at Parc y Scarlets in Llanelli.

Wales U21 are third in Group Three of their Uefa qualifying campaign with 10 points from six games. Czech Republic lead on 16 points, with Armenia second on 11 points.

The 10 group winners and four runners-up with the best record against the teams first, third, fourth and fifth in their sections advance to the play-offs.

After a 20-year playing career of almost 700 appearances for Bristol Rovers, Derby County, Ipswich Town and Colchester United, Williams stepped into management on a full-time basis at Colchester in 2006.

He guided the club to the best-ever finish in 2006-07, when they ended up 10th in the Championship, before being relegated the following season. He was sacked in September 2008.

Five months later, he was appointed as Leyton Orient manager and led the club to League One safety.

He struggled for results the following season, leaving the club in March 2010 after a run of one win in 11 left them a point above the relegation zone.