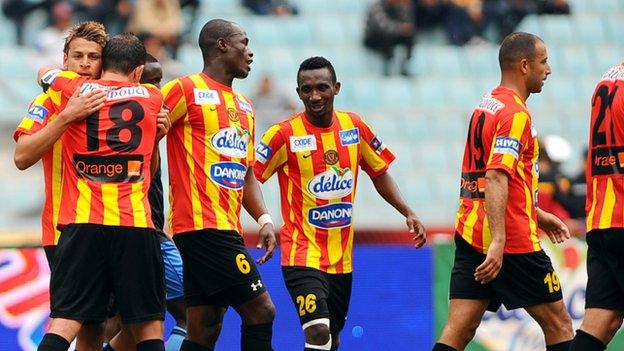 The Confederation of African Football (Caf) rejected a request from four-time champions Mazembe for their opening game against six-time winners Ahly to be moved from Egypt.

Mazembe's president Moise Katumbi said his club had security concerns about the game, following the recent elections in Egypt.

All continental club and international games in Egypt have been played behind closed doors since February's Port Said stadium disaster, where at least 72 fans lost their lives.

Another pick of the weekend's ties sees debutants Berekum Chelsea host the other Cairo giants Zamalek.

The Ghanaian side have been drawn in a tough Group B, which includes Ahly and Zamalek, who have won the competition 11 times between them, and 2010 Club World Cup runners-up Mazembe.

"They are all former champions and we have a lot of respect for them, but we all got to this stage on merit and so we will see how it goes from now on," Berekum Chelsea's Dutch coach Hans van der Pluijm said.

"My boys must believe in themselves. They must believe that nothing is impossible no matter how strong the opposition appears to be, and they must not let anyone push them around.

"Big names do not win football matches, big hearts do. And we will give it our best shot.

"Many people wrote us off after being held at home by Coton Sport and look what happened in Cameroon [when Berekum Chelsea won 2-1 away to progress]."

Zamalek have recently seen striker Ahmed 'Mido' Hossam depart for English second-tier side Barnsley, while Benin striker Razak Omotoyossi says he will not return to the club until outstanding salaries are paid.

Esperance forward Youssef Msakni will remain with the Tunisian club until the end of their Champions League campaign, before moving to Qatari side Lekhwiya on a four-and-a-half year deal next January.

Fellow Tunisians and 2007 Champions League winners Etoile du Sahel tackle AS Chlef of Algeria under the guidance of Mondher Kebaier, their third coach of the campaign, after German Bernd Krauss was fired and Faouzi Benzarti resigned.

The top two clubs in each group after a six-round mini-league schedule will advance to the semi-finals and the champions will earn $1.5m in prize money, plus an invitation to the Club World Cup.