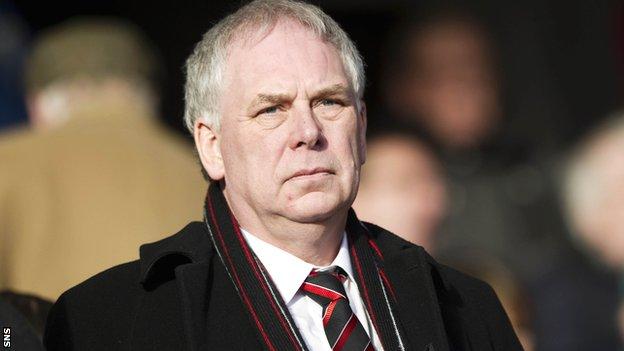 Dunfermline should be given the 'Club 12' slot in the Scottish Premier League, according to the Pars chairman.

Dundee are being proposed over the Pars for the place in the top flight vacated by Rangers.

"We need to know where we are; which teams we're playing and we need to get on with it," said John Yorkston.

The Fife side were relegated from the SPL last season but with Rangers no longer in the top flight, it has created a vacant spot in the division.

Dundee, who finished second behind First Division winners Ross County last season, say they have had no contact from the SPL.

"There's no criteria for the second team going up," added Yorkston.

"There've been cases where a team hasn't been relegated - when Falkirk didn't have a complied stadium - so there are a lot of reasons in our favour.

"It's impossible for ourselves and it's the same for Dundee; even Rangers don't know which league they're going to be in, so their plans must be affected too."

A Rangers newco will now apply for membership of the Scottish Football League, with clubs ready to vote on a proposal that would see them join Division One rather than start in the bottom tier.

That meeting of SFL clubs has now been moved to Friday 13 July.

And SFL chief executive David Longmuir has called on the SPL to clarify the matter of Club 12 before that ballot.

Yorkston said the uncertainty was having an effect on Pars boss Jim Jefferies's plans for his squad ahead of the new campaign.

"Basically, we just want to know which division we're going to be in next year," he continued. "That way the manager can plan what he's going to do next year.

"There are indications that a decision has been made. Dundee have been told not to vote at the SFL meeting."

The SPL listed 'Club 12' instead of Rangers on the fixture list for the coming season amidst the uncertainty surrounding the Ibrox club, which entered administration in February.

Charles Green's consortium has since started the process of relaunching the club under the banner of a new company with Rangers FC plc heading for liquidation.