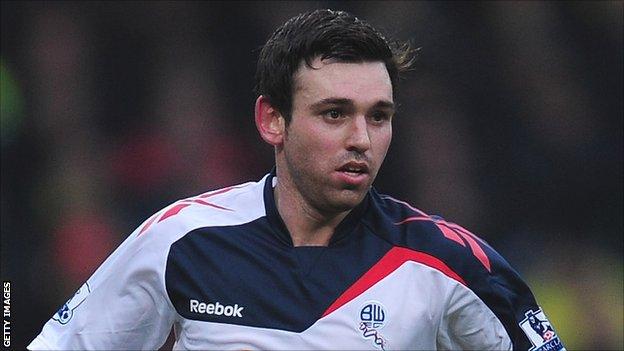 Bolton Wanderers manager Owen Coyle has said he has not received any bids for Mark Davies and would not welcome offers for any of his star players.

The 24-year-old midfielder was one of the bright spots for relegated Bolton last season and has been linked with a return to the Premier League.

Coyle told BBC Radio Manchester: "I'm an open book and I've always told you if there's been interest in my players.

"There have been no phone calls, no dialogue, nothing about Mark Davies."

Coyle added: "It's just the usual paper speculation and conjecture, and for anybody out there who thinks what happened to Bolton Wanderers and losing our place in the Premier League would mean any of our players will be leaving on a whim, they're sadly mistaken."

Keith Andrews and Matt Mills have been added to the Bolton squad that suffered relegation from the top flight in May, while 15 players were allowed to leave at the end of the season.

Veteran goalkeeper Jussi Jaaskelainen was offered the chance to remain at the Reebok Stadium, but chose to link up with former Bolton boss Sam Allardyce at West Ham.

"There were 12 players out of contract last year and 10 or 11 of them have gone," continued Coyle, who returns to former club Burnley on the opening day of the Championship season.

"We've got young players tied up on long-term contracts because that's the future of the club. They'll move us on and take us back to the Premier League, I believe.

"Mark Davies, Adam Bogdan, Chung-Yong Lee - these are all lads that I've tied up on long-term contracts and we did that because we want them to be the nucleus of the team that drives us forward.

"As far as I'm concerned, all of those players are scheduled to be with us next season and looking to get us back into the Premier League."

Meanwhile, Bolton have signed Scotland Under-19 international Joe McKee on a free transfer.