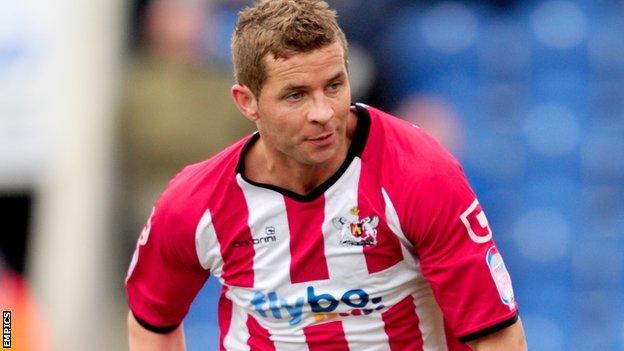 The 29-year-old Irishman initally joined from Barnet in July 2010 but injuries have seen him fail to show the form he had at Underhill.

He scored 34 goals in two seasons at Barnet, but has managed just nine strikes in his two years at City.

"He didn't have one of his most productive years based on that injury and he was affected for most of the season," said manager Paul Tisdale.

O'Flynn had a knee injury which saw him start just 10 times last season, and he has not scored a goal since November.

But Tisdale is confident the former Cork City striker he will get back to his best.

"He'll come back fully fit and it's his chance to perform and make up for some of the lost time last year and our chance to get some of the value of a player who I believe can score goals," Tisdale told BBC Sport.

"He wants to have a better year than he had last year and he wants to have it with us. I signed him two years ago knowing what a good goalscorer he was.

"I've seen it in training. I've seen him play extremely well in a team two years ago with us that was very effective and he missed last year because of circumstances.

"I'm looking forward to seeing him get back into the groove and we need him to be in the groove. We've not seen it from him for a year and I'm expecting it to be the case," Tisdale added.