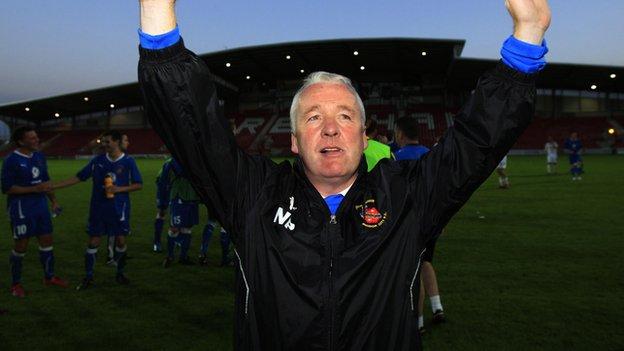 Bangor were within inches of securing their first European win in Bangor for 51 years as the Citizens held Zimbru Chisinau in their Europa League opener.

Zimbru strikers Radu Catan and Oleg Molla were denied in the first-half by Bangor keeper Lee Idzi before a Damien Allen free-kick hit the crossbar.

Jones then squandered a great last-gasp chance as he headed the ball straight at Zimbru keeper Nicolae Calancea.

Now Bangor, playing their first game in their home city for 14 years at the new Nantporth ground, travel to Moldova on 12 July for the return leg in this first qualifying round hoping to qualify for the Europa League second round for the second time in three years.

Bangor City manager Neville Powell said: "There's a bit of disappointment in the dressing room afterwards because in the last 20 minutes we had a couple of good chances and could have stolen it.

"But it was a really professional performance in the first European game at Nantporth and you can see they are a class side.

"It would have been nice to celebrate the return of European football to Bangor with a win but we've got the next best thing and we've kept a clean sheet - and we've got a goal in us for the second-leg so we're in with a good shout."