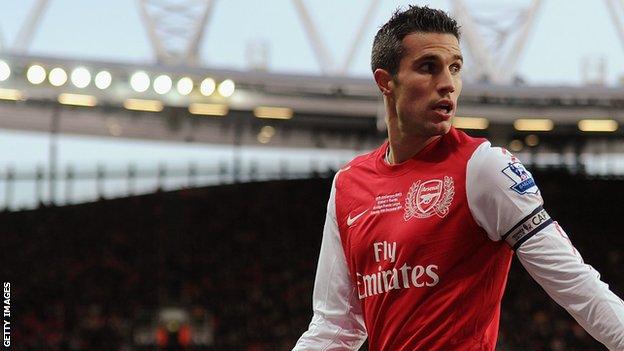 Arsenal striker Robin van Persie has announced that he will not be signing a new deal at the club.

The 28-year-old, who has a year left on his current contract, confirmed he had met with manager Arsene Wenger and chief executive Ivan Gazidis.

But he revealed that they disagree on the way the club should move forward.

"While there was loose talk after the announcement that Van Persie and Arsenal could see out their remaining 12 months of contractual obligation, the tone of the 28-year-old's message surely signals the end of his career at The Emirates."

Read the rest of Phil's blog

"I've thought long and hard about it, but I have decided not to extend my contract," the Dutchman, at the club since 2004, wrote on his website.

It is not yet clear whether Van Persie, who scored 41 goals in 53 games for club and country and was named both the Professional Footballers' Association and Football Writers' player of the year last season, will see out the remainder of his contract or seek a move away from the Emirates.

Arsenal responded with a statement of their own, which read: "We have to respect Robin's decision not to renew his contract. Robin has one year to run on his current contract and we are confident that he will fulfil his commitments to the club.

"We are planning with ambition and confidence for next season with Arsenal's best interests in mind."

The Gunners do not want a repeat of last summer, when Cesc Fabregas and Samir Nasri were sold after the campaign had started.

"It doesn't bode well for Arsenal for the future because they are trying to build a team and their best players are leaving. Even though he has a year on his contract, they are going to have to sell him and get the best price. Arsenal have always been very strict budget-wise and they are not the biggest of payers. But I do believe they will have pushed the boat out on the salary for Van Persie. Obviously he doesn't feel that is enough."

The Netherlands international added in his statement that there would be further meetings once Gazidis returns from a two-week holiday in the United States and that he would provide updates "if and when there are more developments".

Referring to his meeting - on 16 May - with Wenger and Gazidis, Van Persie said: "This was a meeting about the club's future strategy and their policy. Financial terms or a contract have not been discussed, since that is not my priority at all.

"I personally have had a great season but my goal has been to win trophies with the team and to bring the club back to its glory days.

"Out of my huge respect for Mr Wenger, the players and the fans I don't want to go into any details, but unfortunately in this meeting it has again become clear to me that we in many aspects disagree on the way Arsenal FC should move forward."

On Tuesday, Wenger wrote in his Eurosport column: "We want to keep Robin van Persie at all costs, because we depend on him offensively. I have always supported him, even in the hardest times, and I hope he will end his career at Arsenal."

Van Persie, who joined from Feyenoord for £2.75m eight years ago, said his statement was a necessity because of the abundance of media speculation regarding his future.

"I love the club and the fans, no matter what happens," he added. "I have grown up and became a man during my time with Arsenal FC.

"Everybody at the club and the fans have always supported me over the years and I have always given my all on and off the pitch. I am very proud of being part of this fantastic club for the last eight years."

Arsenal have seen a number of their club captains leave over recent seasons, with Patrick Vieira (to Juventus), Thierry Henry and Fabregas (both to Barcelona) all departing.

The club have not won a trophy since beating Manchester United on penalties in the 2005 FA Cup final, the summer after which Vieira was sold.