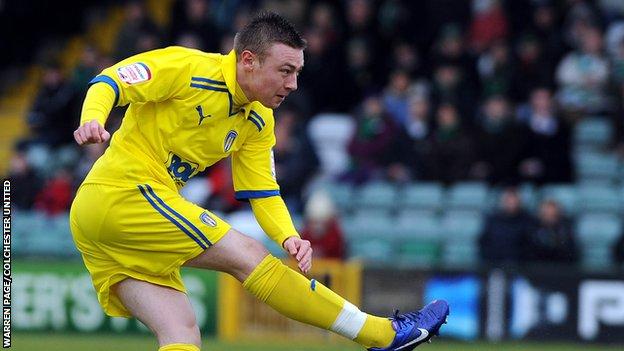 Colchester have signed striker Freddie Sears from West Ham on a free transfer.

The 22-year-old has agreed a three-year contract after an 11-match loan spell at the club last season, during which he scored twice.

"It feels like I've been around longer than I have. I look back, and I've not had a full season under my belt," he told BBC Essex.

"In a way, it's like taking a step back to go forward again. I'm looking forward to the challenge."

Manager John Ward told the club's website: "He is young enough to push on in his career, and we can get the benefit.

"We are delighted to have Freddie on board and I think that three years is a commitment from him to us and what we are trying to achieve here."

Ward added: "It is perhaps down to me that he didn't get as many games as he would have liked in his initial spell, but it is a changed situation for him this time.

"As soon as he was released from West Ham, Freddie wanted to come here and I was wanting him to come."

A former England youth and Under-21 international, Sears was a prolific scorer for West Ham's reserves and made his Premier League debut in 2008 at the age of 18.

However, he was unable to establish a regular place in the side and prior to joining Colchester last season, he had already been out on loan at Crystal Palace, Coventry and Scunthorpe.