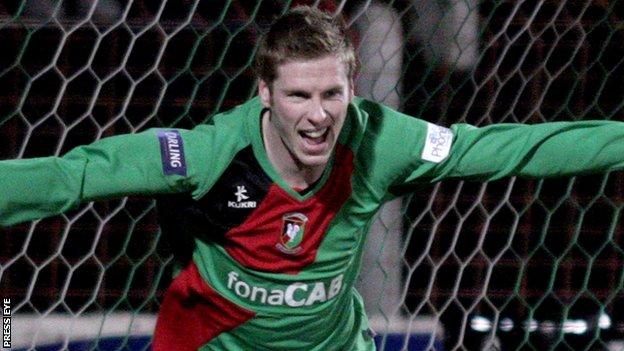 Glentoran striker Darren Boyce has been placed on the transfer list after holding talks with the club.

Boyce is hoping to secure regular first-team football and will take a full part in pre-season training with the Oval outfit.

Jason Hill and Aaron Hogg have signed new one-year contracts at the club.

Glenavon's Jay Magee and ex-Linfield player Marcus Kane are among a number of players training at Glentoran with a view to signing for the club.

Kane was released by Linfield in May while former Ards defender Magee has been at Glenavon for the past three seasons.

"Pending the conclusion of contract negotiations and board approval, these players will supplement Eddie Patterson's playing squad for the 2012-13 campaign," said a Glentoran statement on Wednesday.

The statement added that Boyce had been placed on the transfer list by "mutual consent".

"Darren is keen to secure regular first team football and acknowledges that last season's performances were below the standard both the club and the player had hoped for.

"Despite this move, the player is taking a full part in pre-season training."