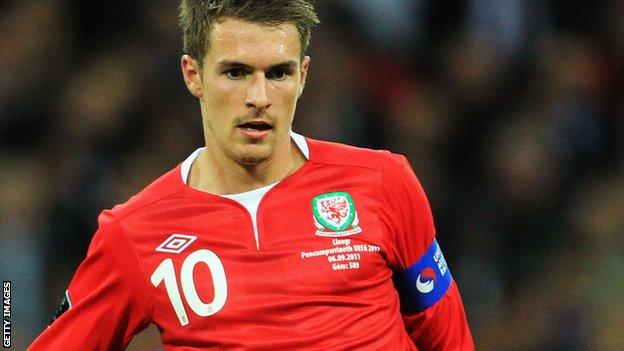 Aaron Ramsey and his Wales team-mates will face no repercussions over their involvement in the GB Olympic team, the Football Association of Wales has said.

Ramsey, Craig Bellamy, Joe Allen and Neil Taylor have defied the FAW's wish by agreeing to play at London 2012.

But chief executive Jonathan Ford said: "We've always made it very clear, we're not going to put any sanctions on any players."

Former Wales captain Ryan Giggs takes the Welsh contingent in the 18-man GB squad to five, selected alongside Bellamy as one of three players allowed over the age of 23.

Gareth Bale was also set to be involved but a back injury has prevented the Tottenham Hotspur winger from taking part.

The four involved face the possibility of another kind of sanction, though, as suspensions from red cards not served during the Olympics will be carried over to the next competitive Wales game.

With no players selected, Scotland and Northern Ireland will be unaffected for their World Cup qualifiers in September, while no English player in the Olympic squad featured in Roy Hodgson plans for Euro 2012.

That leaves Ramsey, Bellamy, Allen and Taylor treading a disciplinary tightrope as they aim for an Olympic medal.

Ford added: "It was always their decision. They knew where we stood.

"Ultimately they were able to make the decision themselves and let's just hope they come back to us fighting fit for our World Cup qualifiers in September."

Wales begin preparations for those World Cup qualifiers in August with a friendly against Bosnia-Hercegovina in Llanelli on 15 August, four days after the men's Olympic final at Wembley Stadium

Chris Coleman's men will welcome Belgium to Cardiff on 7 September in the opening qualifier for Brazil 2014, before facing Serbia away four days later.

Ford said he wished the Welsh players well at the Olympics but said the tournament, which includes a Great Britain team for the first time since 1960, would never come near to the prestige of international football's two major events.

"I'm pretty damn sure there's no player that would give up the Fifa World Cup winners' medal or a Uefa European Championship winners' medal for an [Olympic] gold medal," he said.

"I'm pretty damn sure that's the pinnacle of our sport and that's unfortunately something that will always stay."