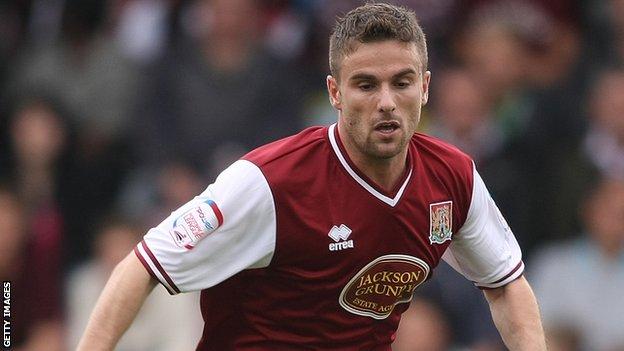 The 28-year-old, who has won one cap for Wales, has left the Cobblers by mutual consent midway through a two-year deal to join Exeter.

"It's a good opportunity for him and I think he's the right type of player to fit in with us," manager Paul Tisdale told BBC Sport.

Having come up through the youth system at Southampton he made his name at Yeovil Town between 2004 and 2007.

He played 115 times and scored 27 goals for the Glovers, form which saw John Toshack give him 15 minutes for Wales in a friendly with Trinidad and Tobago as they prepared for the 2006 World Cup.

In the summer of 2007 he moved to Nottingham Forest with teammate Chris Cohen in deal believed to have been worth £1m.

But he made just 40 appearances for Forest in two-and-a-half years and moved back to Yeovil for six months in January 2010 but failed to overcome a host of injuries and signed for Peterborough that summer.

But Tisdale says the move is a chance for Davies to resurrect his career.

"I know that he had a very good productive period at Yeovil and I know he's had a couple of moves since, then but I think we're a good fit for each other.

"Arron needs to come in and establish himself and worry about his own game and perform - he needs to perform for his own piece of mind.

"It's there to make the most of really. If he gets back to his best he'll be a good team player who can affect the opposition's final third," Tisdale said.