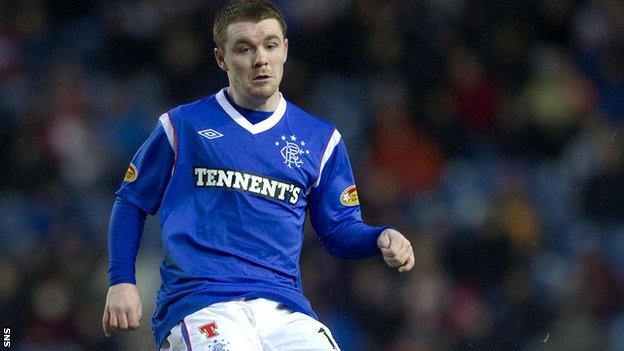 Coventry have confirmed the signing of Scotland Under-21 midfielder John Fleck on a three-year contract after reaching an agreement with newco Rangers.

Fleck, 20, was one of 10 players who refused to transfer their contracts from Rangers to the new company.

BBC Scotland understands that no fee is involved for the move and the agreement in question is a sell-on deal.

"I'm really pleased to get John because he is someone I have like for a while," said Sky Blues boss Andy Thorn.

"I have brought a lot of young talent to this football club who have gone on to great things and I believe that John could be the best of the lot."

Rangers chief executive Charles Green added: "Coventry City have acted in exactly the right way in the transfer of John Fleck to ensure that all three parties - both clubs and the player - are satisfied with the deal."

Fleck made his debut for Rangers at the age of 15 and played in his first competitive match on the day after his 16th birthday.

But he fell out of the picture at Ibrox last season and was allowed to join Blackpool on loan in January.

Of the other players who chose to leave the old Rangers, Steven Whittaker, Steven Naismith and Jamie Ness have signed for Norwich, Everton and Stoke, respectively, while Kyle Lafferty has moved to Swiss side Sion.

They moved on as free agents under advice from their union, with the newco threatening to seek compensation