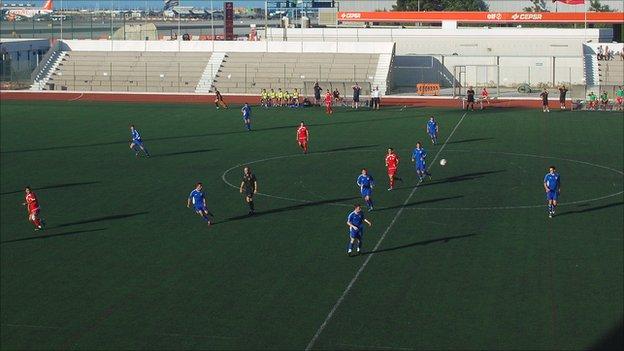 Gibraltar's Football Association is to investigate claims that some of its players spat at Jersey players.

Jersey boss Craig Culkin after the 2-1 loss in the final of the International Shield.

"The Gibraltar FA has launched an investigation to establish whether any Gibraltar players were in fact involved in spitting incidents," said GFA president Gareth Latin in a statement.

And Latin says there will be harsh punishments if people are found guilty.

He added: "The Gibraltar FA condemns spitting as a grossly unsporting act and will take severe disciplinary action against any Gibraltar player(s) found guilty of spitting on an opposition player."

When contacted by BBC Sport, Latin would not give any further details as to the timescale of the inquiry or how many players they are investigating.

Gibraltar had two players sent off in the match as they won the inaugural International Shield final in extra time.