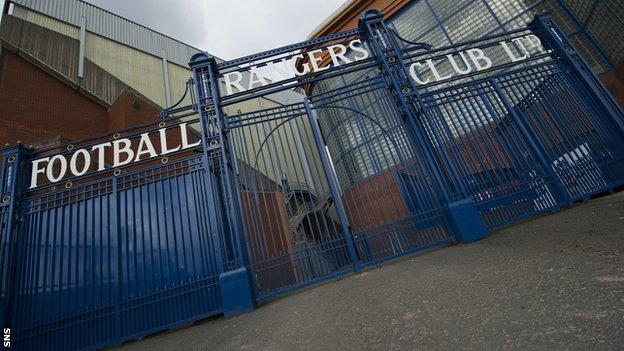 Scottish Premier League clubs gather at Hampden on Wednesday to discuss whether to admit Charles Green's new Rangers to the top flight.

Worried chairmen were believed to have held a late-night conference call on Tuesday as they sought to resolve the crisis.

Motherwell have become the eighth club likely to vote against.

But the vote comes amid warnings about the future of Scottish football should Rangers drop to Division Three.

For avoidance of doubt, the club will not be supporting the application

Glasgow Rangers went into administration in February owing up to £134m to unsecured creditors. The club will eventually be liquidated and has been replaced by a new company.

Its registrations with the Scottish FA and Scottish Premier League were terminated, and the so-called 'newco' setup are seeking the required votes from fellow clubs before being permitted entry into a league.

Scottish Football League clubs had gathered to consider the Third Division option and the alternative of placing the Ibrox club in Division One.

At least 10 SFL clubs had confirmed their opposition to the First Division plan before the meeting.

However, addressed by Scottish Football Association chief executive Stewart Regan and SPL counterpart Neil Doncaster, they were given more detail on claims made in a controversial document outlining the commercial impact of the options.

It includes an assertion that £16m would be lost to the Scottish game if Rangers are relaunched in the Third Division.

No vote had been planned at the SFL meeting and the 30 clubs agreed to consult with their own boards and fans then meet again on 12 July, when a vote is expected.

BBC Scotland understands that some involved in the conference call - between the 11 SPL clubs, excluding Rangers - are pressing for their own vote to be postponed to allow the lower league clubs to make a decision on Rangers' fate.

A number of clubs have listened to the views of their fans, who want Rangers refused entry to the SPL, but fear a resulting loss of television and other revenue would cripple their own finances.

Motherwell became the latest to signal their intentions following the result of a survey among members of the Well Society and shareholders.

With the club's board having promised that the result would help determine their stance, 82% of the 661 taking part rejected the proposal to allow the newco Rangers into the SPL.

St Johnstone issued a statement reaffirming their intention to vote against the application from Green's consortium.

"There has been a good deal of press speculation in advance of tomorrow's meeting of the SPL clubs with regard to how each club will cast their vote in relation to the newco Rangers application to join the SPL," it said.

"For avoidance of doubt, the club's position remains as per the statement which was issued on Monday 25 June, confirming that the club will not be supporting the application."

Aberdeen, Dundee United, Hearts, Hibernian, Inverness Caledonian Thistle and St Mirren have also all previously stated that they will vote against, with Celtic, Kilmarnock and Ross County yet to make a firm commitment.

Meanwhile, the Rangers Fans Fighting Fund has claimed that a poll of supporters showed that 75% of the club's fans would rather play in Division Three than accept a compromise deal for a place in Division One.

Only 3% wanted to accept a place in Division One if it meant that sanctions were inherited as a result of the actions of the old Rangers, which is heading for liquidation.

Even a place in Division One without sanctions only received the support of 20%.