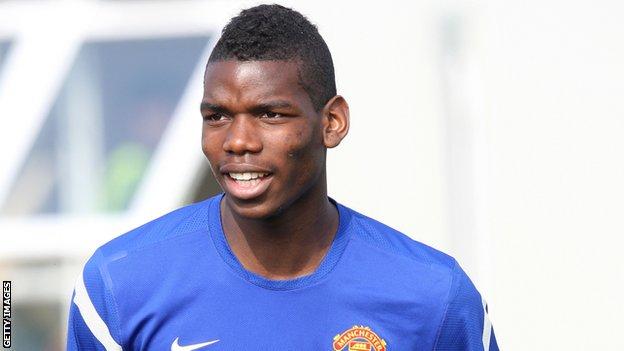 Manchester United have confirmed that midfielder Paul Pogba has left the club to join Juventus.

The 19-year-old's contract at Old Trafford expired this summer and he had been expected to leave.

Manager Sir Alex Ferguson told MUTV: "Pogba signed for Juventus a long time ago as far as we're aware. Which is disappointing.

Pogba will be up against the likes of Claudio Marchisio, Andrea Pirlo, Milos Krasic, Felipe Melo and Simone Pepe for a place in the Juventus midfield

"I don't think he showed us any respect at all so, to be honest, I'm quite happy."

Pogba joined United from Le Havre in 2009 but made just a handful of substitute appearances, with his last outing coming in the 5-0 win over Wolves last March.

Ferguson also confirmed that he is in the dark over the future of left-back Ezekiel Fryers.

Fryers, 19, is also out of contract but is expected back for pre-season training this week.

"We haven't heard anything from Zeki Fryers," Ferguson said.

"I don't know what's happening there but he's not been in touch with the club.

"His agent hasn't been in touch with the club and I can only assume he'll be back for training."