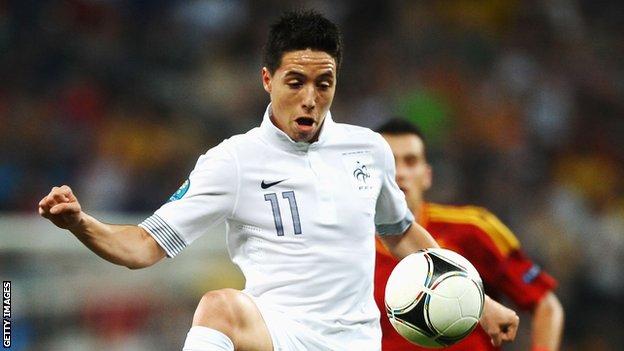 Samir Nasri insulted a reporter while Jeremy Menez did the same with captain Hugo Lloris.

Hatem Ben Arfa rowed with Laurent Blanc and Yann M'Vila did not shake the coach's hand when substituted.

FFF president Noel Le Graet said individual bonus money of £80,000 due to the entire squad had been "frozen".

"I don't want them thinking they are victims. They are not."

In July 2010, the French Football Federation suspended all 23 World Cup squad members after a fractious campaign in South Africa.

after the 2-0 quarter-final defeat to Spain while Menez was involved in a row with Lloris.

Newcastle's Ben Arfa was involved in a dressing-room argument with Blanc, 46, and M'Vila ignored the coach when he was replaced by Olivier Giroud in the game with Spain on 23 June.

Blanc has since has since left his job as manager of the French national team after his contract came to an end.

Like his predecessor Raymond Domenech, Blanc endured infighting between players which he admitted had been a distraction before their Euro 2012 quarter-final defeat against Spain.

Didier Deschamps, who has left his job as Marseille boss, is the early favourite to replace Blanc.

But the French Football Federation has revealed Deschamps has asked for time to think about taking over from Blanc as France coach.

Deschamps has until the end of the week to make his decision, added Le Graet.

Individual bonus money of 100,000 euros due to the entire squad for reaching the last eight in Poland and Ukraine had been "frozen", said Le Graet.

After the end of France's 2010 World Cup campaign, the French Football Federation suspended all 23 members of the World Cup squad for their next game.

France failed to win any of their three group games in South Africa.

The campaign included players boycotting training in support of Nicolas Anelka, who was sent home for insulting coach Domenech.