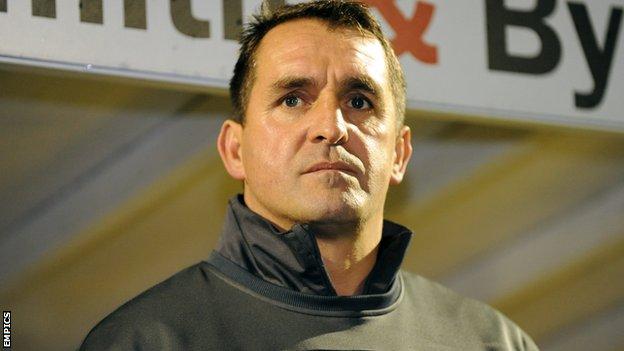 Gillingham have appointed Martin Allen as their new manager.

The former Barnet, MK Dons and Notts County boss has signed a two-year deal at Priestfield.

The 46-year-old fills the vacant post at the League Two side after Andy Hessenthaler became director of football in May.

Allen saved the Bees from relegation last season but departed Underhill when his short-term contract expired at the end of the campaign.

Gillingham are Allen's seventh club in his nine-year managerial career.

After spending time as a coach at Reading, he took his first job as a number one at Barnet in March 2003, when the Bees were in the Conference.

He left a year later to join Brentford before going on to have spells with MK Dons, Leicester and Cheltenham.

He returned to Underhill for a third spell in charge of Barnet in April, saving the club from relegation from the Football League on the final day of last season.

However, his short-term contract with the north London side was not renewed.

Allen is likely to be given a target of securing promotion to League One during his two-year contract.

Gills chairman Paul Scally admitted in May that he asked Hessenthaler to step down as boss following his failure to get the side promoted from League Two.

Allen, who represented QPR and West Ham during his playing days, will be assisted by former Lincoln boss John Schofield.