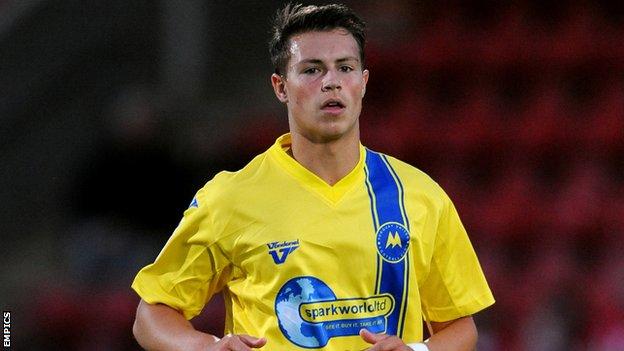 Torquay United have completed a deal believed to be worth around £70,000 for Swindon Town attacker Billy Bodin.

The 20-year-old Welsh Under 21 international has signed a two-year contract at Plainmoor having spent part of last season on loan at the club.

"Billy's been a target since the day he left the football club so to finally get it over the line is a pleasing situation," said manager Martin Ling.

"There was a big smile on his face and he is more than happy to be back here."

Bodin had been at the County Ground since he was 12, but was told by boss Paolo Di Canio that he could leave the County Ground after the club brought in Tommy Miller,Gary Roberts, Andy Williams and James Collins.

He scored five goals in 19 appearances during a loan spell at Plainmoor between August and January last season.

"Swindon offered him a very good contract to stay, but it was nothing to do with money," Ling told BBC Sport.

"We didn't offer the money Swindon offered to him, so it's nothing about money, it's about personal ambition for him.

"When he was here he was outstanding, so if he can get better than that I think we'll all be on a winner."

The price tag is the highest fee Ling has ever paid for a player, but he said he felt it was a worthwhile investment, bearing in mind the money the Gulls received for selling Bobby Olejnik [£300,000] and Mark Ellis [undisclosed, but believed to be between £70,000 and £80,000].

"It is a decent figure for this football club, it is only five figures but it's a substantial offer for us to pay out," said Ling.

"If someone said we'd be paying that type of money out for a player a year ago it didn't seem possible, but the fact that we've sold other players for five and six figures allows us to pay five figures for one.

"If we make him into the player that I think he can be we will be selling him for six figures," he added.