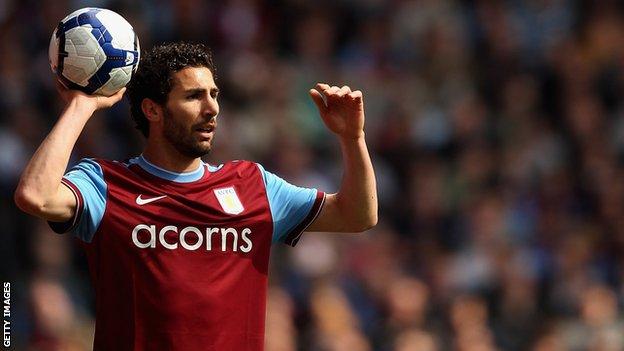 Sunderland have signed Spanish defender Carlos Cuellar on a two-year deal after his contract at Aston Villa expired.

It will be the second time Cuellar has worked with Sunderland manager Martin O'Neill, who brought him into English football in 2008.

Cuellar, who also played for Osasuna and Rangers, cost Villa £7.8m and made 123 appearances in a four-year spell.

Carlos Cuellar was handed the number four shirt at Rangers as reward for his hard work the season before - but he never wore it, moving to Aston Villa days later.

Cuellar, 30, becomes O'Neill's first permanent signing since taking over as manager in December 2011.

Injuries, as well as falling out of favour with managers Gerard Houllier and Alex McLeish, resulted in Cuellar making only 27 league starts in his last two seasons at Villa Park.

He was close to returning to Rangers last summer, but the move broke down due to fears over Cuellar's fitness record.

The move comes after Sunderland allowed George McCartney to return to West Ham on a two-year deal.