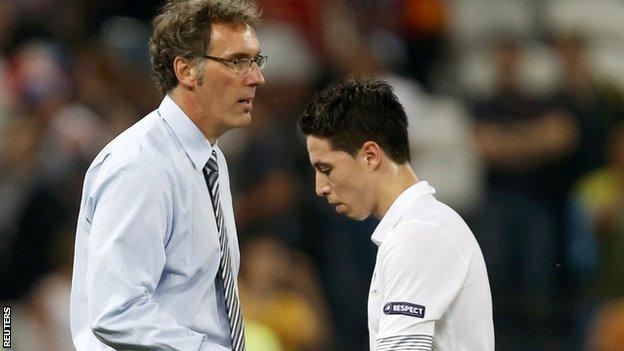 Uefa president Michel Platini has defended Samir Nasri after the France forward swore at a journalist during an argument.

Platini also said suggestions that Nasri could be banned for two years by France are ridiculous.

Former France captain Platini said: "If I got suspended every time I insulted a journalist I wouldn't have many caps.

"What he deserves? I have heard talk of a two-year suspension but that's absolutely ludicrous."

Michel Platini captained France when they won the European Championship in 1984.

The Manchester City player had gesticulated angrily to the stands following his equaliser in France's opening game, a 1-1 draw against England. His reaction of putting his finger to his lips was believed to have been aimed at the French media.

He then became involved in a heated exchange of words with a journalist following France's quarter-final exit to Spain.

The clash occurred in the Donbass Arena after the 24-year-old was asked for his reaction to the result.

Nasri reportedly called the journalist a "son of a bitch" and repeatedly complained about the media's behaviour.

The former Arsenal player, a substitute in the game, added: "There, now you'll be able to say I've been badly brought up."

After that incident, Nasri wrote on his Twitter page: "The supporters and in particular children should know that I regret that my language may have shocked them.

"I love the France team, football and I have a profound respect for the fans."

Nasri did not apologise to the reporter, only adding: "It's a personal matter between some journalists and me. I will explain further when the time comes."

The French Football Federation is due to meet next week to discuss Nasri's case.