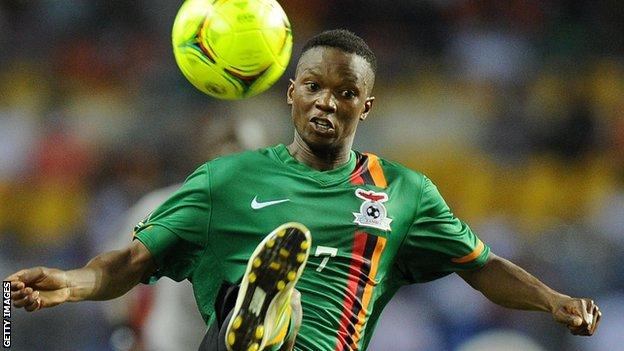 Zambia's star midfielder Rainford Kalaba is aiming to achieve a feat that none of his compatriots have ever accomplished - winning a continental double in a single year.

Kalaba was one of the key members of the Chipolopolo side that won their first Africa Cup of Nations title in Gabon in February.

At club level, his Congolese side TP Mazembe are in the group stages of the African Champions League, where they face Berekum Chelsea of Ghana and Egyptian giants Al Ahly and Zamalek.

But the 25-year-old thinks Mazembe, the four-time African club champions, have enough armour to claim their fifth title.

"It is very important for me to win the Champions League," he told BBC Sport.

"It will add value to my career.

The league here is tougher than the Zambian league. Players here play with determination. They play for nothing but the heart and their team

"It will bring glory to my country Zambia as well as to the Congolese people.

"We will approach our opponents with respect but we will not let the points slip away."

Kalaba only joined Mazembe last year and within months of moving to Katanga province, where the club is based, they were thrown out of the Champions League for allegedly fielding an ineligible player.

He acknowledges the anguish of not playing in the competition in his first season, but it appears to have added to his hunger to win the cup this year.

Kalaba thinks Mazembe - the first African side to reach the final of the Club World Cup two years ago - have also since grown in stature.

"It is very important that we reclaim the cup. We are happy to be back, but the games will be very tough," Kalaba, who is among more than a dozen Zambians at Mazembe, added.

"Zamalek is a good team and so is Al Ahly. Both teams have experience in the Champions League but we will go there to carry the points."

On a personal level, Kalaba, who has also played for Nice of France and Portuguese side Braga, appears to be enjoying his time in Congo. Only a two hour drive separates Lubumbashi from his home town of Mufulira, in northern Zambia.

The food, culture and weather are the same, says Kalaba, but football in Congo is much more competitive.

"The league here is tougher than the Zambian league. Players here play with determination. They play for nothing but the heart and their team," he said.

"It's not easy for us guys because you have to sweat to get a win."

No other clubs have come calling yet for Kalaba, who is contracted to Mazembe until 2015.

"My future now is with Mazembe until 2015 and that's what I am concentrating on," he said.

"If any offer comes, we will look at it, but right now I am with Mazembe and it's only them I think about."