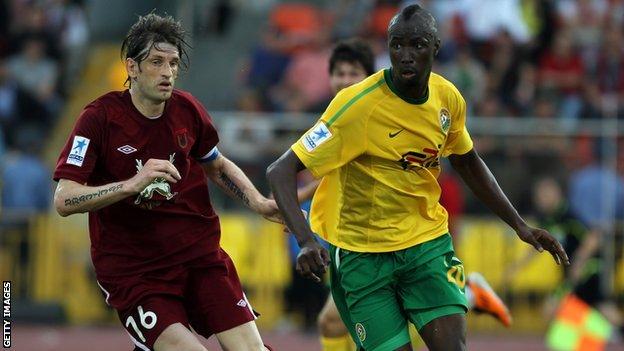 Ivorian striker Lacina Traore is set to join Anzhi Makhachkala from fellow Russian side Kuban Krasnodar, after both clubs agreed a transfer fee.

The highly-rated forward joins a number of African players at Anzhi, including Samuel Eto'o and Christopher Samba.

Traore had been linked with a moved to Liverpool before agreeing to join the big-spending Caucasus-based club.

"Traore's transfer is totally in line with the goals that our club has set this season, achieving the highest possible results in the Russian league as well as in Europe," Anzhi general director Aivaz Kaziakhmedov said.

He will link up with Cameroon striker Eto'o, who joined the club for 21m euros (£18.4m) from Inter Milan last August, and Congolese defender Samba, who moved from English side Blackburn Rovers for an undisclosed fee in February.

Traore, who notched 18 goals in 39 games for Kuban last season, helped the club to eighth in the Russian Premier League - their best finish to date.

Anzhi finished fifth in the top flight last season to qualify for the Europa League, but the club's billionaire owner Kerimov has huge ambitions for the future under Dutch coach Hiddink.

Officially based in the insurgency-plagued Caucasus region of Dagestan, Anzhi train in Moscow for security reasons and only fly into Makhachkala for home games.