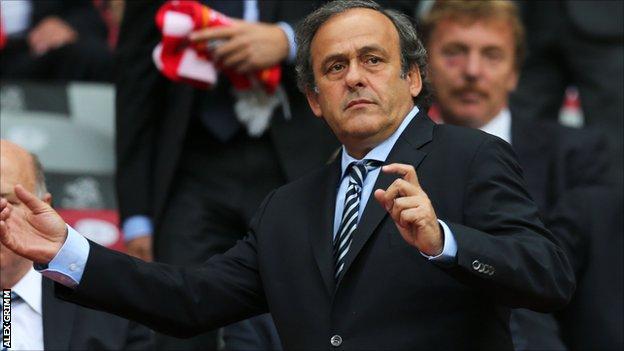 Uefa president Michel Platini says the 2020 European Championship could be spread across various cities in Europe, rather than having a single host.

Traditionally one or two countries have hosted the tournament, which is being held in Poland and Ukraine this summer.

The next competition in 2016 will be hosted by France.

When Uefa president Michel Platini told his audience in Kiev that the possibility of having Euro 2020 in 24 to 32 host cities was a "great idea" it is fair to say not too many instantly shared his enthusiasm.

Platini was speaking at his pre-Euro 2012 final media conference in Kiev and if his hope was to capture attention and create debate then he certainly did.

Euro 2012 has been a success on the pitch but there have been logistical problems for supporters getting around Poland and Ukraine and there have been empty seats at high-profile matches. Spreading the tournament around so thinly around so many venues would hardly help.

Platini also says it would help infrastructure costs and circumnavigate the need to build new stadia or improve airports. Surely the best way to solve this problem is to have the tournament in a single country?

Turkey had been favourite to host the event in 2020, but their bid has hit difficulties due to a desire to host the Olympic Games in Istanbul in the same year.

Scotland, Wales and the Republic of Ireland have also formally declared an interest in hosting Euro 2020.

Platini confirmed a final decision would be taken in January or February next year.

"This matter will be discussed very seriously," he added. "We will have a great debate about 2020 and discuss the pros and cons.

"It's an idea I feel really passionate about, it will be a lot easier from a financial perspective.

"We are not going to wait until we know whether Turkey are going to get the Olympics.

"It creates a problem for us. We do have other candidates. Everyone has the possibility to host it.

"It is easier to go from London to Paris or Berlin than Cardiff to Gdansk. It would be four games per venue. It is a great debate."

Platini added: "We are just thinking about it. I have said 12 or 13 host cities, it could be 24 or 32. In these days of cheap air travel anything is possible.

"It is the political decision that needs to be made. We wouldn't have to build stadiums or airports. That could be important in an economic crisis."

In January 2011, Platini called for the 2022 World Cup to be played across the whole of the Gulf after Qatar won the right to host the tournament.

Meanwhile, Platini has repeated his opposition to goal-line technology. Platini has previously stated he believes its introduction would lead to "Playstation football".

"I am against technology," he said at Saturday's press conference in Kiev.

"Where do we stop? There was a mistake in the Ukraine-England game.

"But there was an offside before that."