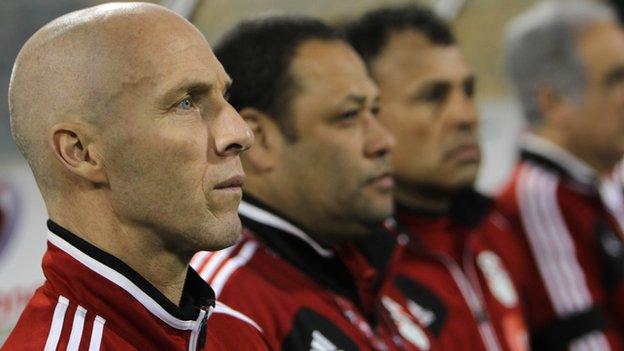 The seven-time African champions trail 3-2 from the first leg, when they suffered a shock home defeat.

The Pharaohs must win the tie in Bangui on aggregate or they will miss out on the Nations Cup finals for the second time in succession.

"We understand that 2-0 is a score that will be good for us," said Bradley.

"In that respect, sometimes you don't need to go crazy too soon - you need to be smart and when the first goal comes, the second will come next."

However, the American coach is well aware that the situation in Bangui will change if the Egyptians can match CAR's goal tally in Alexandria earlier this month.

"If we were able to score three goals, that opens up other possibilities so we have to read the game and find the right way to attack from the beginning but also do it intelligently."

CAR stand on the verge of the greatest feat in their football history, with qualifying victories having been rare in the years since achieving independence in 1960.

Their Nations Cup qualifying defeat of Algeria in 2010 marked the first time in 37 years that CAR had won a competitive fixture.

A barren run followed again until this month, when CAR not only won its first World Cup qualifier in history - when beating Botswana 2-0 on home soil - but also triumphed in Egypt as well.

Should they avoid defeat against the Pharaohs on Saturday, CAR will stand 180 minutes away from a first qualification for the Nations Cup.

"Over the past five years or so, the federation has been scouting for players and we're beginning to see the results of their efforts," defender Kelly Youga told BBC Sport earlier this month.

CAR leapt 30 places in the latest Fifa rankings, breaking into the top 100 for only the second time in their history, and can expect to rise again since the victory in Egypt was not taken into account for June's ratings.

Despite the importance of the match, Egypt have left themselves little time to acclimatise to conditions since they will have just 24 hours in Bangui before the game.

Bradley has defended the decision following advice from the Egyptian government.

"We've spoken to people in our embassy and in terms of food and conditions, we felt that it's best we arrive late, play the match and then leave," he said.

"We feel this is a decision that will have us in the best possible [shape] for the match."

The winner of a match postponed because of the uncertain political situation in Egypt will become the 30th team to make the final round of qualifying.

15 two-legged play-offs will then take place in September and October to decide which teams join hosts South Africa in next January's finals.

The draw to determine which teams will face one another later this year takes place in Johannesburg on Thursday 5 July.