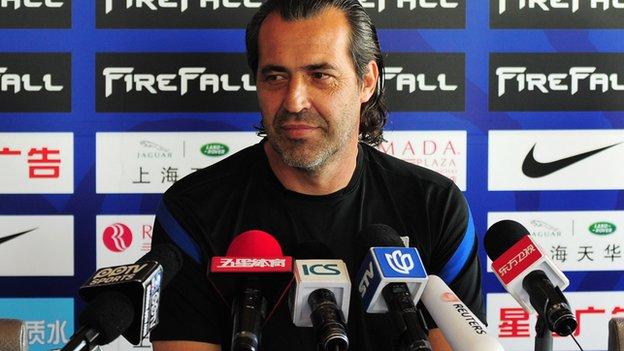 Drogba joined the club on a two-and-a-half-year deal on 20 June, a month after winning the Champions League with Chelsea.

"I wish he could arrive as early as possible," said coach Sergio Batista.

Shenhua have made a poor start to the Chinese Super League, where they lie 12th in the 16-team division.

Despite the presence of Drogba's former Chelsea colleague Nicolas Anelka, Shenhua have won just three games in the league after 14 rounds of action.

The Frenchman's impact has been limited since his arrival, with the 33-year-old having scored just twice in nine appearances.

Shenhua are one of several Chinese football clubs to have gone on a spending spree on foreign players and managers in a bid to raise their game.

The Argentine is hoping to take Shenhua to a top-three finish and cup victory this season.

One of Drogba's first games for Shenhua could come against old rivals Manchester United, who play the Chinese side on 25 July as part of a pre-season tour.

On Thursday, another African joined the Chinese league when Nigeria's Yakubu signed for Guangzhou R&F.