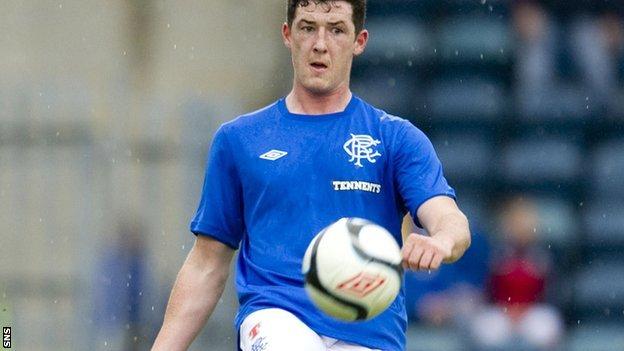 Ross Perry has committed to newco Rangers saying he owes the club for giving him his chance to become a professional footballer.

The 22-year-old defender was one of 13 players who attended the start of pre-season preparations at Murray Park.

Nine players have objected to having their contracts transferred to Charles Green's owning consortium.

But Perry said: "They've been great to me and I think I owe them. I think I've got a lot more to give."

Some of the boys have felt the need to go elsewhere, but I'm comfortable here

Perry had said at the end of last season that he wished to remain at Ibrox until his contract expires in the summer of 2015.

"I've been here since I was 11 or 12 years old and Rangers have been there for my whole football career," the Scotland Under-21 international told Rangers' website.

Green's consortium, who have bought Rangers' assets as the old company heads for liquidation, could be forced to play in Division One or even the Third Division next season.

However, Perry is undeterred and is hoping to become a first-team regular having made 12 appearances last season.

"Hopefully, over the next season or two, I can do that," he added.

"This is my sixth or seventh year as a professional and it has been great here.

"The manager and the staff have been here for the majority of that time and I've loved every minute of it.

"Obviously some of the boys have felt the need to go elsewhere, but I'm comfortable here and I'm happy here."