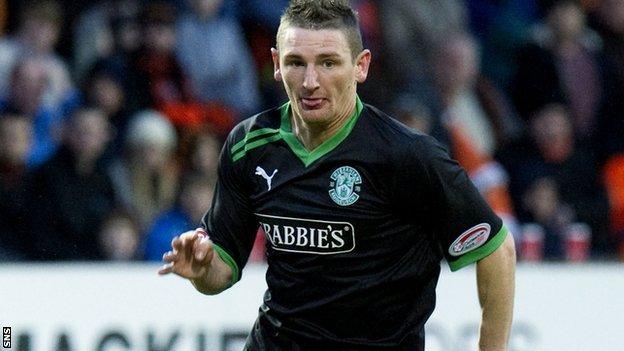 Hibernian midfielder Martin Scott is to join former club Ross County on a season-long loan for their debut in the Scottish Premier League.

The 26-year-old fell out of favour at Easter Road after the arrival of Pat Fenlon in November.

"And I would like to thank Hibernian for their assistance in completing the loan deal to make it happen."

Scott, who is also known as "Jimmy", began his career with hometown club Livingston before starting a five-year spell in Dingwall in 2006.

He sprung into the national spotlight by scoring the second goal in a famous victory over Celtic that took County to the Scottish Cup final for the first time in their history in 2010.

Adams left his manager's post with County to join Hibs as assistant to Colin Calderwood following the Cup final defeat by Dundee United.

And it was during Adams' time at Easter Road that Scott followed him to Edinburgh for a fee of £80,000 in January 2011.

But the midfielder was fined by the club in July for punching Sean Welsh during a training session in a confrontation that left his team-mate requiring an operation to repair a fractured cheekbone.

Scott was made available for loan in March after Fenlon announced that the midfielder did not feature in his future plans.

However, Adams believes he can be a positive influence on County as they enter the top flight for the first time.

"Jimmy's not only an exceptionally gifted footballer who can play in a number of positions but he's also an exceptional character," he said.

"The spirit and camaraderie in the dressing-room and within the club has been a huge part of what we have achieved here so far and I know Jimmy will only add to that.

"So I'm delighted we've been able to bring him back and I would like to thank Hibernian for their assistance in completing the loan deal to make it happen."

Scott made 29 appearances for Hibs, 11 as a substitute, but has not started at first-team level since January.