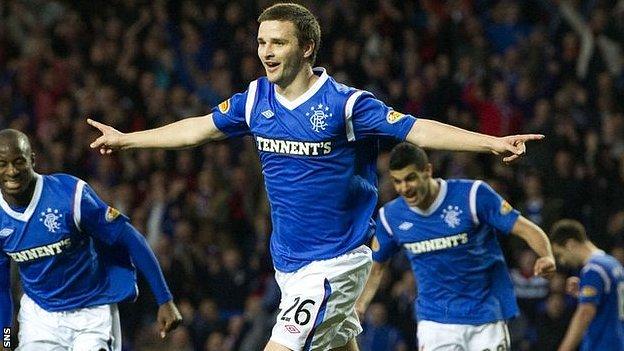 Jamie Ness is expected to join Stoke City on a four-year deal after rejecting a move to the Rangers newco.

Midfielder Ness, 21, graduated from the Rangers youth sides to the first team, making his debut in 2010.

However, a series of injuries restricted his appearances to just 18 in as many months.

Ness is one of several players to have refused a move to Charles Green's company, who are attempting to relaunch Rangers as a new company.

Scotland Under-21 cap Ness scored a stunning goal against Celtic in a Scottish Cup Old Firm derby last year and was on target again when Rangers beat Dundee United in May.

Stoke finished 14th in the Premier League last season and Ness will be the Potters' first summer signing, subject to all required paperwork being completed.

The English club will have to apply for an international transfer certificate which the Scottish FA will be asked to grant.

But it is entirely possible Green will attempt to block this request at which point the player's lawyers could seek judicial review or ask Fifa to become involved.

Ness's proposed transfer could therefore set a precedent for the other players who have turned down a move to the Rangers newco.