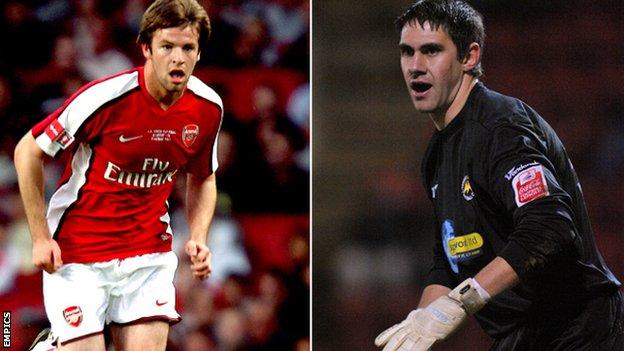 The pair have been recruited after the Gulls sold goalkeeper Bobby Olejnik to Peterborough and centre-back Mark Ellis to Crewe Alexandra earlier this month.

Poke, 26, spent three spells on loan at Plainmoor between 2008 and 2010 and is highly regarded at the club.

Cruise, 21, played one game for Arsenal and spent time of loan at Carlisle.

Poke began his career at Southampton but played only four games at the club before moving permanently to Brighton in the summer of 2010 - and during that period played 49 games for the Gulls as he helped them get back into the Football League.

Poke was the first choice of many fans and captain Lee Mansell told me last week that he would easily slot in to the set-up at Plainmoor.

He impressed many in his two seasons at the club but will have a hard act to follow in Olejnik.

Torquay will hope Cruise can realise the potential that took him through the ranks at Arsenal.

But he will find it tough to break into the team at left-back with Kevin Nicholson one of the most consistent performers in League Two.

"We know he is a quality goalkeeper from his last time here," said manager Martin Ling.

"I tried to sign him last summer and it never came off because Brighton didn't want Michael to leave, but he is an ideal replacement for Bobby Olejnik."

Cruise's last first team game was against Torquay United for Carlisle in the FA Cup third round in 2011 when the Gulls won 1-0.

He was on Arsenal's books since he was eight years old and is an England youth international.

"He was understudy to Gael Clichy for a year at Arsenal and made his professional debut for the club in a Champions League game at Olympiakos."

"He was out injured all last season and this move is an opportunity for him to relaunch his career," said Ling.

"Once Lathaniel Rowe-Turner left the club, we were always looking for a left-back who could also play left-sided centre-half, and this boy can cover both positions."

However, Ling is still in the market for another defender with experience ahead of the new season.

"It toughens up our defensive unit but we realise that we also need to bring in a dominant centre-half to replace Mark Ellis," he added.

"I see Cruise and young Kirtys MacKenzie as my numbers three and four at centre-back, so we need another first-choice defender to play alongside Brian Saah.

"That final player will be someone with experience and at least a 100 games of professional football under his belt."