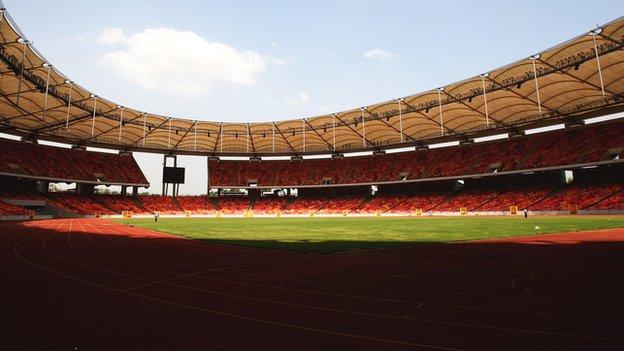 English Premier League side Arsenal will play Nigeria's Super Eagles in a pre-season match in Abuja on 5 August.

Ranked 60th in the latest Fifa rankings, Nigeria face a Gunners side that finished third in the English top flight last season.

It will be the first time Arsenal have played in the West African nation.

"We are delighted to announce that Arsenal Football Club will face the Super Eagles of Nigeria in Abuja," said promoter David Omigie of DanJan Sports.

DanJan Sports say that agreement has been finalised with the Nigeria Football Federation (NFF) to provide a strong Super Eagles side.

"The NFF have agreed that the country will present a strong side as coach Stephen Keshi continues his development process," said Omigie.

"The Arsenal manager [Arsene Wenger] will also use this game to showcase his full squad for the 2012/2013 football season."

The London club traditionally hosts an annual pre-season tournament at the Emirates Stadium, but they opted to postpone the event for a year because of the 2012 London Olympics.

The visit to Nigeria will conclude Arsenal's pre-season after tours to both China and Malaysia in July.

On their official website, Arsenal said: "The club last visited Africa during a tour to South Africa in July 1993."

"It is returning as a result of the fantastic support which exists for the team, not only in Nigeria, but across the entire continent."

DanJan Sports revealed that tickets for the match will go on sale from 4 July.

Four years ago, they brought two other English clubs, Manchester United and Portsmouth, to the Nigerian capital Abuja for a pre-season friendly.

As well as the match between the two, Portsmouth also played against Nigeria Premier League side Kano Pillars.

Two-time African champions Nigeria have competed at four World Cup tournaments, failing to reach the knock-out stages at the last tournament in South Africa in 2010.