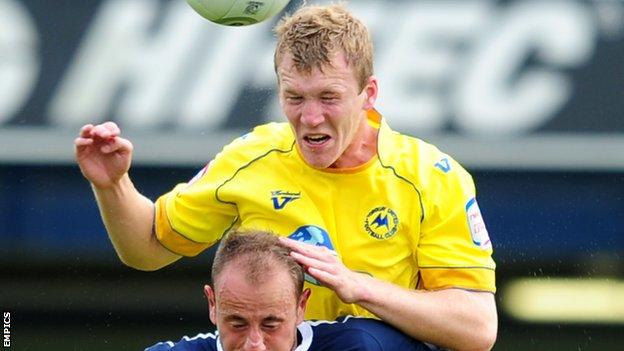 The 23-year-old former Bolton player was given a deadline by Gulls boss Martin Ling to make up his mind.

But Ellis has opted for the chance to feature at a higher level in League One for newly-promoted Crewe, with whom he has signed a two-year deal.

The clubs are believed to have agreed an £80,000 price tag for Ellis, Torquay being due a fee as he is under 24.

Plymouth-born Ellis has scored 12 goals for Torquay in 136 games since arriving from Bolton, initially on loan, in September 2007.

It's the wrong time to move on. He's got a chance to enhance his reputation in League One. Maybe sacrificing the chance to earn more money somewhere else now will pay off

The seven-figure sale of last season's top scorer Nick Powell to Manchester United has loosened the purse strings a little at Gresty Road.

And the Alex are expected to follow up their move for Ellis by bringing in Chesterfield midfielder Jamie Lowry and Swindon striker Billy Bodin, who both made loan moves to Crewe last season.

Apart from the loss of Powell and the release of play-off final winning captain David Artell, Crewe may also lose wide man Byron Moore and surplus striker Shaun Miller, who has so far not attracted any offers.

Moore, who netted the Alex's second goal in their League Two play-off final win at Wembley in May, is taking his time weighing up the offer of a new two-year deal.

And, although he would command a fee if he moves elsewhere, boss Steve Davis feels that it, in terms of attracting bigger clubs, it might be the wrong time to move on.

"He's had a good season," boss Steve Davis told BBC Radio Stoke. "He's scored 10 goals from the wing, including that crucial one at Wembley that took us to League One. That's his best season since he's been here.

"But it's the wrong time to move on. He's now got a chance to enhance his reputation in League One.

"Maybe sacrificing the chance to earn more money somewhere else now will pay off when clubs come in for him on the back of that.

"Then he'll have the bigger clubs looking at him. l hope he's going to be patient."