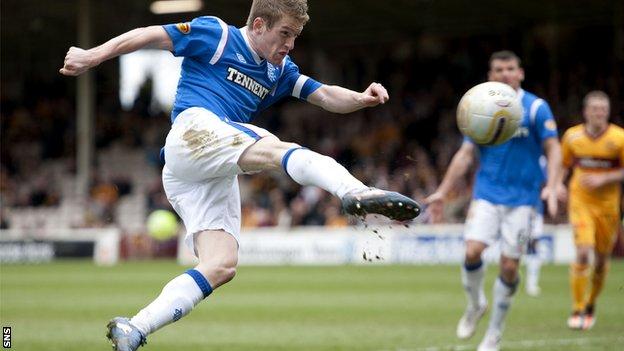 The consortium led by Charles Green believe the players' contracts should transfer from the old, soon-to-be liquidated Rangers.

Green, whose consortium bought Rangers' assets after creditors rejected a plan to take the old company out of administration, says he will use the courts to block the players' departure and seek damages.

Scotland defender Lee Wallace has announced he intends to remain with Rangers for the remainder of his five-year contract.

Green's newco Rangers has submitted an application to be granted entry into the Scottish Premier League and will face a vote by all 12 top-flight clubs on 4 July.

However, enough clubs have already stated they will be voting against Rangers' application to leave the new club facing the prospect of having to apply for entry to the Scottish Football League.

Raith Rovers and Falkirk have gone public with their opposition to a new Rangers being admitted to Division One instead of starting life two rungs below.

"This has been an extremely difficult period for all the players and, in the end, their decisions were influenced largely by footballing considerations," added Ms Gribbon.

"The players' commitment and loyalty to oldco Rangers cannot be questioned; they voluntarily took significant wage cuts in a genuine act of solidarity, which ensured that none of the playing squad or club staff would lose their jobs.

"But for their contribution, it's likely that the club would not have survived until the end of the season.

"As professional footballers, the players' careers are relatively short-lived and they are entitled to exercise basic employment rights the law affords to all employees in this country under the TUPE Regulations.

"I now expect the SFA and Fifa to interpret their Rules and Regulations in accordance with the TUPE legislation so that the players' registrations can be released without delay."

Rangers are due to start pre-season training on Thursday, the same day as staff who have agreed to transfer their contracts are due to receive their first pay packets from the Sevco consortium.

But they are already facing one change to their plans ahead of the new season. Southampton have announced that Anderlecht will replace Rangers in this year's Markus Liebherr Memorial Cup, which will also feature Arsenal, because of question marks about the strength of the Glasgow club's squad.

Meanwhile, the Scottish Football Association is awaiting information from Green to support his newco club's application for membership of the governing body.

Green submitted a letter of application on Friday, but the SFA needs formal documents relating to his consortium, requirements for fit and proper officials, and plans for his newco Rangers.

It was agreed that Green, whose group purchased the business and assets of Rangers for £5.5m, would provide details before this weekend.

The transfer of the SFA membership from soon-to-be-liquidated Rangers to Green's newco could take place at the same time as a decision is made over which league the club will play in.

The club were forced into administration in February over an unpaid tax bill and failure to secure a company voluntary arrangement in order to exit the process consigned the club to liquidation.