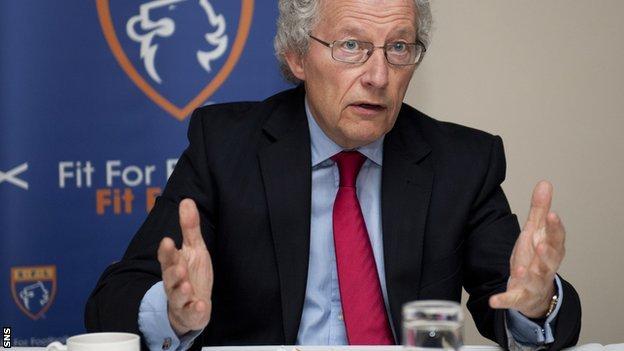 Former First Minister Henry McLeish believes the Rangers crisis will force the reconstruction of Scottish football, just as he recommended.

McLeish proposed play-offs to the top flight and a pyramid system into the bottom tier in his 2010 report for the Scottish Football Association.

"I am very hopeful that the shock to the system that was Glasgow Rangers has now put people in a position where we are at a tipping point," he said.

"And these reforms will go ahead."

Clearly the ethics, the credibility of the game have been badly shaken

A merger between the Scottish Premier League and the Scottish Football League, which organises the three divisions below, is also now being proposed.

And McLeish believes that Rangers' lurch towards liquidation and the creation of a new club at Ibrox has forced football authorities to think beyond their own interests for the good of the game.

"You need a shock to the system because Scotland is a culture generally that finds change difficult - we look at lessons and still don't want to take them," he told BBC Scotland.

"This is about the product on the pitch - about competitive football, more play-offs, a pyramid system, the two league set-ups coming together and, of course, a recalibration of the leagues themselves.

"We've got to collectively build a new future. I remain optimistic. If we can turn our minds to the big issues ahead then we'll have a game we can be proud of, a game in which we qualify for the European Championships and hopefully a World Cup."

It is looking like a "newco" Rangers will not win enough votes from other clubs to remain in the SPL, while those in Division One have started to come out in opposition of the Ibrox club being parachuted into the tier below.

McLeish insists it is not for him to say in which division the Glasgow club should be playing next season.

However, he said: "Clearly the ethics, the credibility of the game have been badly shaken by what's happened at Ibrox, so therefore there have to be punishments meted out.

"That said, we have to realise that the club needs a home.

"We need them back in Scottish football, so I think there's a balance to be struck.

"I think we can do that. But, at the end of the day, let's not throw the baby out with the bathwater."

SPL clubs have found themselves under pressure from their own fans to vote against Rangers remaining in the top flight and McLeish thinks supporters will emerge with greater power.

"The fans have views about what they want in terms of reconstruction and the way ahead and often these have been ignored," he added.

"If there's anything coming out of the Rangers issue, again it will be the fans having a secure base in what we do because football without fans just won't work.

"And when you look at some of the crowds we are getting in the SPL then you can see that people are drifting from the game.

"We've got to bring them back and that does mean, in terms of the financial aspects of the game, the fans should have a say in terms of how the clubs are run."