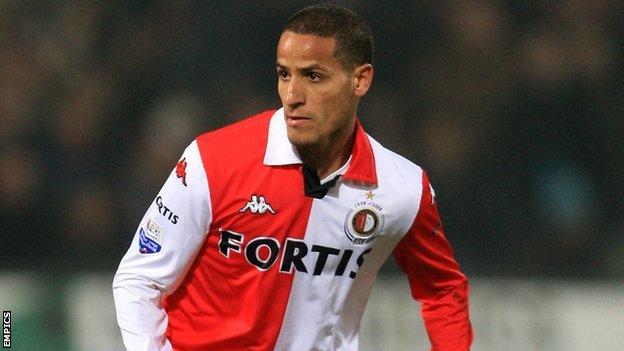 Lambert told the club's website he is looking forward to working with the midfielder when the team report for training on 5 July.

"Karim will help the team, he's a really good footballer and he's played well in a good team," said Lambert.

El Ahmadi, who joins Villa for an undisclosed fee, has been with Feyenoord since signing from his hometown club Twente Enschede in 2008 and had talked of a transfer to Villa Park as a "dream move".

"It was always a dream of mine to play in the Premier League," he told avfc.co.uk. "We played a lot on Sundays in Holland, so I was able to watch all of the games on Saturday and I think this is the best league in the world.

"Last year was successful for me and for Feyenoord - we qualified for the Champions League - but sometimes in life you have to make choices."

The signing of Ahmadi comes at a time when new boss Lambert is being linked with a variety of names, including his old Norwich centre-forward Grant Holt.

Villa are also reported to be listening to offers for Cameroon midfielder Jean Makoun, Gerard Houllier's £6m acquisition from Lyon in January 2011, who impressed on loan with Olympiakos last season.