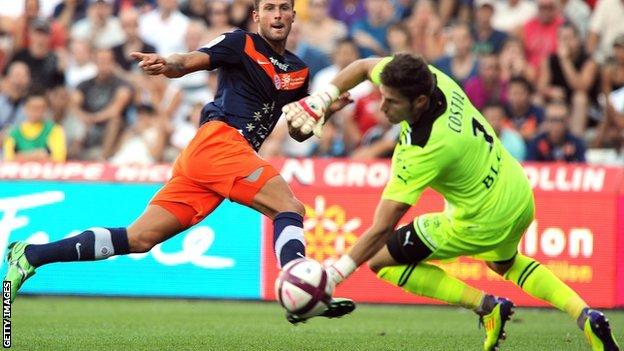 Arsenal have finalised the signing of Olivier Giroud from Montpellier for a reported £12m.

The France international, 25, completed a medical and paperwork with the club on Monday evening.

"He has a very good physical presence and is exceptional in the air, with a great work ethic," said Wenger.

"We are excited about Olivier joining us and he will add an additional dimension to our attacking options next season.

"He has proved that he is capable of performing at the top level with club and country, and we saw what a big influence he was in Montpellier's championship-winning side last season."

"I was attracted by the philosophy of football and Arsene Wenger's 'touch' at this club," Giroud told the official Arsenal website. "I have always admired Arsenal with its great history and reputation, and I now hope to achieve great things here."

At 6ft 3ins, Giroud believes he has the physique to thrive in the Premier League.

"I think I have the weapons to do well here," he said. "It might be a style that I'm good at, though I'm also a player who likes to play, who likes to participate in the game.

"I will need some time to adapt, of course, but I'm not worried about that - I think I will adapt well."