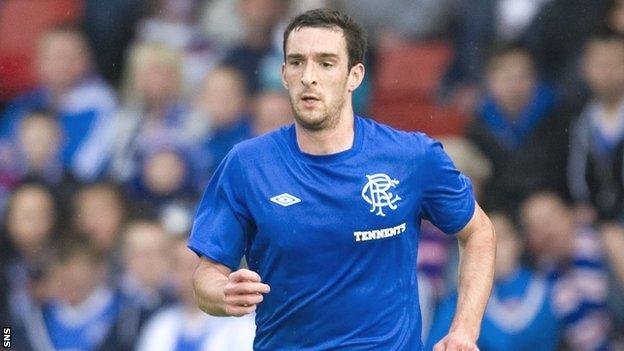 Lee Wallace has told Rangers that he plans to remain at Ibrox for the duration of his five-year contract.

His decision mirrors that of Lee McCulloch, who has also said he will continue to play for "newco" Rangers even if they are refused admission to the Scottish Premier League.

Four first-team players have said they will not transfer to the new Charles Green-owned company running the club.

Scotland international Wallace, 24, says he has "more to show the fans".

In recent days, key players Rhys McCabe, Sone Aluko, have indicated they plan to continue their careers elsewhere, an ambition disputed by Green who believes that their exits would represent a breach of contract.

Green's consortium bought Rangers' assets for £5.5m after the club failed to exit administration by way of a company voluntary arrangement.

Wallace joined Rangers from Hearts last summer and was manager Ally McCoist's second signing. The Edinburgh club are still owed £800,000 from Rangers for the player.

He said: "When I arrived at Ibrox the support from the club, players and fans was fantastic.

"The fans showed great faith in us all during tough times and I still feel I have more to show them during the remainder of my contract.

"My partner is expecting our first baby soon and my priority is to my family. This gives me the incentive to improve my performance and ultimately win trophies.

"My personal decision in no way condemns or judges those made by my fellow professionals as I believe each person has different circumstances and reasons which will determine the road they choose to travel at this particular time.

"I respect the decision taken by each individual player."