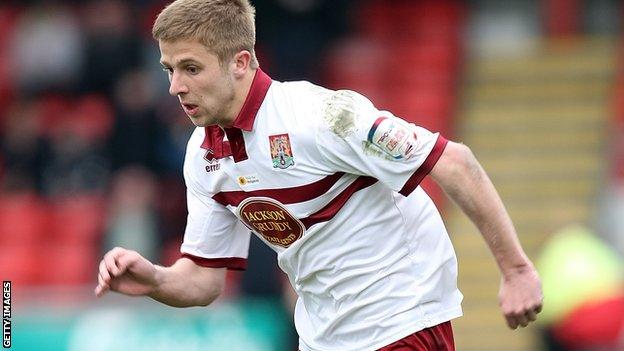 Derby County have signed midfielder Michael Jacobs on a three-year contract after he turned down a new deal offered by Northampton Town.

The 20-year-old will join the Rams on 1 July and because of his age, they have agreed to pay an undisclosed amount of compensation to the League Two club.

"He is a player we identified some time ago as someone who would be a very good addition to our squad."

Jacobs, who can play on either flank, made 100 league and cup appearances for Northampton after coming through their youth academy, scoring 15 goals - one of them at Anfield in the victory over Liverpool in the 2010-11 League Cup.

We've had to be patient in getting this deal done

And Clough is confident he is ready for the challenge of stepping up two divisions.

"We feel he has plenty of potential, which we believe he can fulfil in a Derby County shirt," he told the club's website.

"We've had to be patient in getting this deal done, but we're very happy to get it over the line."

Jacobs is Derby's first signing of the summer following the departures of Paul Green and Chris Maguire to Leeds and Sheffield Wednesday respectively.